Sr. Clare had downloaded these stories from the internet, printed them, and used them with the children at Assumption Catholic. At the top of the first page, we find this brief note written by Sr. Clare: “Kids love these stories before going into adoration.”  She had observed how they truly helped the children’s Faith in the Eucharist to grow! We share the first story with you below. 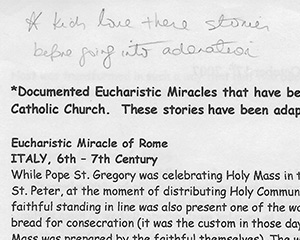 While Pope St. Gregory was celebrating Holy Mass in the ancient church dedicated to St. Peter, at the moment of distributing Holy Communion, he noticed that among the faithful standing in line was also present one of the women who had prepared the bread for consecration (it was the custom in those days that the bread used for the Mass was prepared by the faithful themselves). The woman, however, was laughing out loud, and the Pope asked her the reason for her behavior. The woman defended herself by saying she could not bring herself to believe how it was possible that the very bread which she herself had prepared with her own hands, thanks to the words of the consecration, became the Body and Blood of Christ. St. Gregory then prohibited her from going to Communion and began to pray to God to enlighten her. He had just finished praying when he saw that very piece of bread prepared by this woman turn into flesh and blood, at which point the woman repented, fell to her knees, and began to weep. Part of the Reliquary is still preserved to this day at the Benedictine Monastery in Andechs, Germany.