Sometimes we believe everything that people tell us even when what they are saying doesn't seem right to us. Many times television commercials will try and tell us that this new, cool toy is the best. We buy it and it breaks two days later.

We share this article written by Sr. Clare from the HM Zoom+ magazine, published in 2009. She shares a story from her childhood for the section “When I Was Little.”

On Saturdays, when I was little, my entire family would go over to my granny's house. All my aunts, uncles and cousins would be there. The big people would all sit in the living room, drinking tea and talking, while all the children would go outside to play.

After dinner one day, one of my granny's neighbours gave all the kids an apple. I saw one of my cousins spitting out parts of the apple. "What are you doing?" I asked him as I had just finished my apple.  "I'm spitting out the seeds," he said, "Where are yours?"

"I ate them," I responded. Everyone stopped what they were doing and looked at me. "She ate hers too," I said, pointing to my little sister.

All my cousins looked at us with terrified expressions on their faces. "Do you not know what happens when you eat apple seeds?!!!" they said. My little sister and I shrugged our shoulders. Our cousins then broke the terrible news to us. They told us that the apple seeds went straight down to our belly and that if we drank water, the water would fall on top of the seeds and a tree would start to grow. They had seen it once in a movie and they said it could happen in real life too.

For the rest of the day my sister and I tried not to drink water so that the tree wouldn't grow inside of us. One of my cousins said that the branches of the tree would start sticking out of our mouths. My little sister and I began to get really afraid. 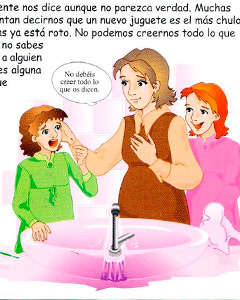 Just before we went to bed that night, we were in the bathroom brushing our teeth. Afterwards my sister forgot the whole tree situation and drank some water. I dropped my toothbrush and started shaking my sister, saying, "Spit it out, spit it out," but it was too late. My sister said that she already felt a branch coming up her throat. I didn't know what to do. I didn't know how to help her. I had never seen a tree coming out of anyone's mouth before. So I started to scream and she started to scream but I told her to stop and to close her mouth so that the branch wouldn't come out. Then my mother flung open the bathroom door, "What is going on?!" We both just stared at her. "Why are you screaming?" "We have trees growing inside of us and hers is about to pop out!" I said. "Wait a minute, wait a minute, wait a minute... who told you that you have trees growing inside of you?" We explained the whole story to my mother. She told us that it was not true and that we shouldn't believe everything we hear. My mother told my sister to open her mouth to see if any branch was going to come out. She held it open for about twenty seconds and nothing happened. We each drunk a glass of water and nothing happened. Nothing happened. It was all a big lie!

Sometimes we believe everything that people tell us even when what they are saying doesn't seem right to us. Many times television commercials will try and tell us that this new, cool toy is the best. We buy it and it breaks two days later.

We can't believe everything we see and hear on television. If you don't know if something is true or not, ask someone who does know, especially when it comes to questions or doubts about what we believe as Catholics. If you are not sure about something you can ask your parents or a good priest or sister. Don't keep it to yourself. Look what happened to my little sister and me for not asking our parents if the tree thing was true or not. So, when something doesn't sound right, tell someone or ask!