The Back Shed Group

Our Lord gave us talents so that we might use them well, not to impress others or use them for bad things. The most important thing is that we use them for His glory.

In this “When I Was Little” article for the HM Magazine, Sr. Clare shares her dreams of fame and greatness from when she was little. She wrote this story to encourage kids to use their talents for good and for God’s glory, and so that they would not fall into envy.

When I was little, my sisters, some friends and I started a band. Our dream was to reach the heights of stardom. We were going to make CDs, tapes, music video clips, etc. But first of all, of course, we had to buy some instruments and then… learn how to play them.

Every Saturday we would have our weekly band meeting in the shed in my back garden. It was the little shed where we would put parts of broken bicycles, mirrors that were cracked, halves of clothes pins, etc. There, among the bits and bobs, we would practice our songs using our improvised instruments which consisted in: a hairbrush that I, the lead singer, used as a microphone, two empty biscuit tins that my friend used as drums, four empty toilet paper rolls covered with newspaper with stones inside that we used as maracas, and our neighbor who could make a guitar sound with his voice.

The time would pass quickly as we spoke about our future as a band. We would talk eagerly about the day when there would be pencil cases with our photos on them and socks with our band name. Our band name had been decided on the first day after various opinions, those of which included “Purple,” my youngest sister’s idea (it was her favorite color); “Sparky,” the name of the neighbor’s dog; “Football is the Best,” which was shortly outvoted by the female members of the band, and so on and so forth until it was decided that we would be called “The Back Shed Group.” 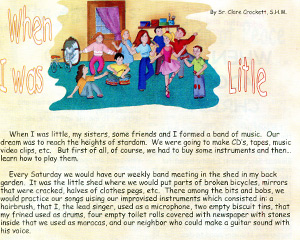 There were eight of us in the “Back Shed Group.” Five of us sang and played “instruments” and the other three were the dancers, one of whom was my youngest sister who at the time was learning Irish dancing, another one was a girl who did ballet, and then there was my sister’s friend who had “two left feet.”

One day, while we were practicing, the dance group started to argue.

“No, we have to do it like this,” the ballerina said as she started to spin around. My sister’s friend tried to do it but after two seconds, her face turned five different colors and she said, “I feel sick.”

My sister refused to do it, and said, “We’re not doing that, this is better…”

She started “Irish dancing,” although she didn’t do it very well. She would jump up and down and then stop and make a movement with her foot that seemed as if she were trying to kill an insect by stepping on it. While all of this was happening, my other sister who played one of the maracas discovered that she too could make a guitar sound with her voice and said that it was better if Joseph played the shakers and she did the guitar sound. But Joseph didn’t agree. Then my friend who played the “drums” said that she could also be a lead singer. She played the drums very well, but singing was a different story.

“If I can’t sing, I’m leaving the band… and I’m taking this biscuit tin with me!” (One of them was hers). When she said this, there was a great silence.

“I feel sick,” my sister’s friend moaned and then everyone started shouting at the same time, each one with her own complaint until my mother came out and shouted.

When my mother asked what the problem was, we all started telling her our problems at the same time.  My mother put her fingers to her lips and whispered very loudly, “Enough!!! Each one of you has to be happy with the talent you have and you must use it the best you can. You shouldn’t try to make the others jealous and you shouldn’t be jealous of what the others have. If you’re a ballet dancer, you have to dance your best. But this doesn’t mean that everyone else has to dance ballet.  If you’re the singer, the same thing goes for you, and you can’t expect everyone to sing how you want him or her to sing. Everyone is different and unique…”

It is true. We are all different and unique. There is no one in this world that is the same as you. It is also true that God has given each one of us a talent or many talents: drawing, dancing, singing, talking, etc. But we have to be careful with the talents that we have been given. As my mother said, we shouldn’t use them to make others jealous or to make ourselves out to be the best. We have to use our talents to make God happy. The “Back Shed Group” used their talents badly and in the end their selfishness and pride meant that the band couldn’t continue. Our Lord gave us talents so that we might use them well, not to impress others or use them for bad things. The most important thing is that we use them for His glory.