When I Was Little: “Where is Baby Jesus?”

Sr. Clare had a section called, “When I Was Little” in HM Zoom+, a children’s magazine, which the Home of the Mother publishes bi-monthly. In “When I Was Little,” through fun stories she would make up, she transmitted love for Jesus to the little ones and introduced them to the practice of the virtues. In the 34th number of HM Zoom+, published for Christmas of 2004, Sr. Clare wrote this cute article, “Where is Baby Jesus?” If you would like to hear Sr. Clare read the story in Spanish, click here. 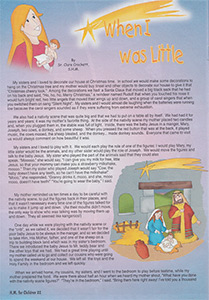 My sisters and I loved to decorate our house at Christmas time. In school we would make some decorations to hang on the Christmas tree and my mother would buy tinsel and other objects to decorate our house to give it that “Christmas cheery look”. Among the decorations we had: a Santa Claus that moved a big black sack that he had on his back and said, “Ho, ho, ho, Merry Christmas”, a reindeer named Rudolf that when you touched his nose it would turn bright red, two little angles that moved their wings up and down, and a group of carol singers that when you switched them on sang “Silent Night”. My sisters and I would almost die laughing when the batteries were running low because the carol singers sounded as if they were suffering from extreme exhaustion.

We also had a nativity scene that was quite big and that we had to put on a table all by itself. We had it for years and years; it was my mother’s favorite thing. At the side of the nativity scene, my mother placed two candles and, when you plugged them in, the stable was full of light. Inside, there was the baby Jesus in a manger, Mary, Joseph, two cows, a donkey, and some sheep. When you pressed the red button that was at the back, it played music, the cows mooed, the sheep bleated, and the donkey…made donkey sounds. Everyone that came to visit us would always comment on how beautiful it was.

My sisters and I loved to play with it. We would each play the role of one of the figures: I would play Mary, my little sister would be the animals, and my other sister would play the role of Joseph. We would move the figures and talk to the baby Jesus. My sister who played the part of the animals said that they could also speak. “Mooooo” she would say, “I can give you my milk for free, little Jesus, so that your mommy can make you a strawberry milkshake, moooo”. Then my sister who would play Joseph would say, “Cow, the baby doesn’t have any teeth, so he can’t have the milkshake”! “Mooo”, she responded, “Granny drinks it, mooo, and she, mooo, mooo, doesn’t have teeth!” “You’re going to wear the baby out” I said.

My mother reminded us ten times a day to be careful with the nativity scene, to put the figures back in their places, and that it wasn’t necessary every time one of the figures talked for us to make it jump up and down. (As their mouths didn’t move, the only way to show who was talking was by moving them up and down. They all seemed like kangaroos!)

One day while we were playing with the nativity scene or the “crib” as we called it, we decided that it wasn’t fair for the poor baby Jesus to be always in the manger, and so we decided to take Him, His mother, father, and one of the sheep on a trip to building block land which was my sister’s bedroom. There we introduced the baby Jesus to Mr. teddy bear and the other toys that we had. We had a great time playing until my mother called us to go and collect our cousins who were going to spend the weekend at our house. We left all the toys and the Holy Family in the bedroom and we left quickly.

When we arrived home, my cousins, my sisters, and I went to the bedroom to play before teatime, while my mother prepared the food. We were there about half an hour when we heard my mom shout, “What have you done with the nativity scene figures?” “They’re in the bedroom,” I said. “Bring them here right away! I’ve told you a thousand times not to take them from here!” We went to get the figures. The bedroom floor was covered with games, building blocks, dice, jigsaw, dolls, markers, and there among the huddle we found Mary, Joseph and the sheep, but the baby Jesus was nowhere to be found. “Oh no!” I said, “Where did we put the Baby Jesus?” Between the shrugging of shoulders and the gasps of “Uh-oh,” no one knew where He was. 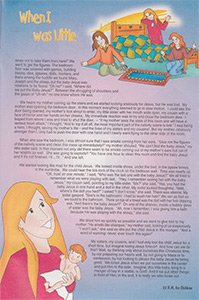 We heard my mother coming up the stairs and we started looking anxiously for Jesus, but He was lost. My mother was opening the bedroom door. In that moment everything seemed to go in slow motion. I could see the door being opened, my mother’s foot about to enter, my little sister with her mouth wide open, my cousin with a face of horror and her hands on her cheeks. My immediate reaction was to try and close the bedroom door. I leaped from where I was and tried to shut the door. – “If my mother sees the state of this room she will have a serious heart attack,” I thought, “And to top it all off, the most important part of the nativity is lost.” I was being a hero, I thought, saving my mother’s life – and the lives of my sisters and cousins! But my mother, obviously stronger than I, only had to push the door with one hand and I nearly went flying to the other side of the room.

When she saw the bedroom, I was almost sure that I saw smoke coming from her ears. “Give me the figures of the nativity scene and clean this mess up immediately!!” my mother shouted. “We can’t find the baby Jesus,” my little sister said. In that moment not only did there seem to be smoke coming out of my mother’s ears but out of her nostrils as well. She was going to explode!! “You have one hour to clean this room and find the baby Jesus and if it’s not finished, I’ll… I’ll…” And she left.

We started looking like mad for the child Jesus. We looked inside shoes, under the bed, in the jigsaw boxes, in the wardrobe. We could hear the tick-tock of the clock on the bedroom wall. Time was nearly up. “OK, hold on one minute,” I said, “Who was the last one with the baby Jesus?” We all tried to remember what we were playing with last. “Hey, I remember seeing her with the baby Jesus,” my cousin said, pointing to my little sister. “Me?” she said. “Yes, you had the baby Jesus in one hand and a doll in the other.” My sister looked thoughtful.  “Well, where’s the doll you had?”  I asked. “I don’t know” she said. There was silence. My sister gasped. “She’s in the bathroom! I had to wash her hair!” We ran as fast as we could to the bathroom. There on top of a towel was the doll with her hair dripping wet. “And there’s the baby Jesus!!” On one of the shelves, inside a bubbly glass of water was the baby Jesus. “Ah, now I remember, I was giving him a bath because he was playing with the sheep,” she said.

We dried him as quickly as possible and we went to give him to my mother. “He smells like shampoo,” my mother said, looking at us suspiciously. “I won’t ask,” she said as she put the child Jesus in the manger. “And a word of warning: never, ever touch this again!”

My sisters, my cousins, and I had only lost the child Jesus for a short time, but imagine losing Jesus forever! And how can we do this? Well, by thinking only about ourselves this Christmas time, by not preparing our hearts well, by not going to Mass or to confession, by not looking to please the baby Jesus or being good. We lose Jesus when we put ourselves in the center and put Him to the side. Think about it! This little baby, lying in a manger of hay in a stable, is God! And if we put other things in front of Him, in the end, it is we who really lose out.