"...For Theirs Is the Kingdom of God"

Article from H.M. Magazine:  "Even though I was the teacher I feel that they were the ones who taught me…"

Among the many natural gifts that the Lord granted Sr. Clare, one that seems to stand out among them was her gift for writing. With all of her apostolic work she did not have much time to write, but every now and again she would find time to write for the Home of the Mother adult and children's magazines. We found some of her articles in which you can see her profound reflections but also the geniality and sense of humor that so well characterized her. We offer here one of those articles. 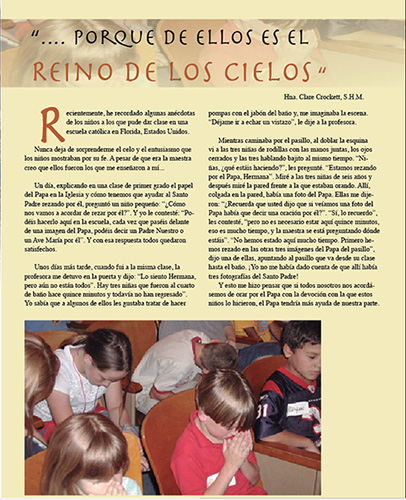 Recently in our community we were remembering some anecdotes of some of the children we taught in a Catholic school in Florida, USA.

It never ceased to amaze me the zeal and enthusiasm the children had for their faith. Even though I was the teacher I feel that they were the ones who taught me….

In a class of first graders I was explaining the role of the Pope in the Church and how we have to help the Holy Father by praying for him. “How will we remember to pray for him?” a small boy asked “Here in the school,” I replied, “Whenever you pass by a picture of the Pope you can say an Our Father or a Hail Mary for him,” and with that response they were all satisfied.

A few days later when I went to that same class, the teacher stopped me at the door and said, “I’m sorry Sister, not all the class is here. There are three girls who went to the bathroom fifteen minutes ago and still haven’t come back.” I knew that some of them liked trying to make bubbles with the soap from the soap dispenser in the bathroom and so I imagined the panorama. “Let me go and have a look,” I said. 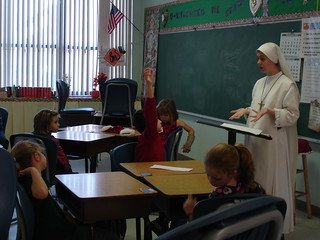 As I walked down the hallway and turned the corner I saw the three girls kneeling down with their hands folded, their eyes closed and the three of them whispering at the same time. “Ladies what are you doing?” I asked them. “We’re praying for the Pope, Sister!” I looked at the three little six year olds and then I looked at the wall they were praying in front of. And there, hanging on the wall, was a picture of the Pope. “Remember you said that if we see a picture of the Pope we should say a prayer for him?” “Yes, I remember, but it’s not necessary to be here fifteen minutes. That’s a long time, plus your teacher is wondering where you are.” “We haven’t been here a long, long time. First, we prayed at the other three pictures of the Pope in that hallway,” they said, pointing to the hallway that goes from their classroom to the bathroom. I didn´t realize that there were three other pictures of the Holy Father in the same hallway!

If only we could all remember to pray for the Pope with such devotion as these children did.