Fr. Fred Parke:  The time that I remember the most about the Sisters and Sister Clare especially was when I was asked to give a talk about the Catholic tradition at the community college.  I said to the professor, “Could I bring four sisters along?” and they said, “Wow, that’d be wonderful!” So we got in the van and off we went.

Fr. Fred Parke, pastor of Assumption Catholic Church in Jackosnville, Florida, for many years passed away on October 18, 2021. He was the one who invited our sisters to found a community in Florida in 2006. We would like to share part of an interview from 2017, in which he shares some of his memories of Sr. Clare, who worked in his parish for four years, from 2006-2010.

I’m Father Fred Park from the parish of Assumption Catholic Church. And Sister Clare was among the four sisters that we had that began the ministry here for our school…. She was from Ireland and being from Ireland and so full of personality, she was the one that really became the superstar of the four sisters. I can’t remember the first time I met her… I think they all moved in at the same time and we had the reception on the lawn of the rectory, and I noticed Sister Clare was surrounded by so many people, because she was laughing and outgoing. 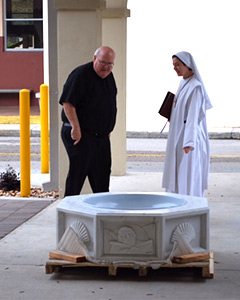 She was always off to kid me in many ways. She was always very coming up and she wasn’t as intimidated that I was the pastor. She wasn’t intimidated at all. She would just come up and, “Hey, how are you doing, Father?” And she was a joy, of course, to be around.

The time that I remember the most about the Sisters and Sister Clare especially was when I was asked to give a talk about the Catholic tradition at the community college.  I said to the professor, “Could I bring four sisters along?” and they said, “Wow, that’d be wonderful!” So we got in the van and off we went. We got off at FSCJ (Florida State College at Jacksonville), and, first of all, the reaction on the campus was hilarious because people had seen a priest in a collar but they hadn’t seen Sisters in full habit… probably never. And so when they stepped out, the look that people had was as if we’d stepped out of a spaceship! We got into this classroom and there must have been 50 college kids, boys and girls, in the lecture hall. I started out by talking about Catholicism in general, and then I said, “Now, we have here Sisters who will talk about the day to day life of a Sister.” And obviously they all deferred to have Sister Clare talk and she was so able and comfortable with them. They would ask some unbelievable questions, flat out: “You mean you don’t have sex?” And she was totally unflappable. She was not scandalised by the question, she came back, she says, “No, there are more important things than that.” Then she talked about her life as an actress and she says, “All that was out there, but that doesn’t give you real peace.” And she was so convincing because she was close to their age, full of life and enthusiasm about what she was doing. And the kids were amazed. We had an hour class, and it was over and the kids didn’t leave. I kind of stood off to the side and most of the young people were gathered around her and they were still asking her questions… And it ended up that kids were following us across the campus, back to the van. The class was at least a half hour longer and kids were following them. Following Sister because she had this attraction, this life in her that was so ‘life and light’. This enthusiasm emanated from her, and she had a way of making people feel comfortable.  She made you just so completely at ease, and I think that’s what the kids saw in her. The other thing is kids that age in college are looking for love in all the wrong places and that’s what Sister pointed out. And they were mystified that a person so close to their age could fall in love with Christ, and not the world. And they were scratching their heads. They couldn’t understand… They heard about the lifestyle, and yet they could not understand how someone could be so happy. And she exuded happiness. I mean joy is certainly a sign of the presence of the Holy Spirit.