“Be a Holy Priest”

Fr. David Keegan:  Her love for the Church, for the Eucharist and for Our Lady really opened my heart. She just helped me understand what my life was supposed to be focused on and centered on.

Father David Keegan is a priest of the diocese of Saint Augustine, Florida. During her time in Florida, Sr. Clare was very instrumental in his vocational discernment.

About the year 2005-2006 I started a conversion experience. I was raised in the Church and went away for a little bit. I was listening to the Queen of Peace Radio, the Catholic Radio here in Jacksonville, and I heard an Irish girl on the radio inviting us to come to pray at Assumption Church. And I heard it many times, and it just kept calling out to me. She would say, “Come pray with us in the Church,” but what I would hear her say was, “David, come pray with us. David, come and pray with us.” And so, I did some research, I found out where Assumption was and then I went. I think that was in May 2007. It was the first time I went and encountered Sr. Clare.

My first impression of Sr. Clare was: an amazing sister. I had never really been around sisters before. So, my first encounter with her was during the Holy Hour when she was giving points of meditation. I still remember the first meditation she gave us. It was on pride. I was in the beginning stages of my conversion, so all these concepts and theories were new to me. But she was speaking directly to my heart when she was talking about pride. And not only pride of thinking too good of ourselves, but the pride of thinking we're too bad for God's mercy, that we’re too far away. And because of some of the choices I had made, I was dealing with that. She was clearly speaking to my heart. So, that was the first encounter I had with her. The Lord was definitely using her for my conversion. 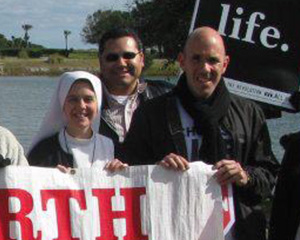 Once we were on a retreat and she was giving a talk, a meditation during Adoration. And she was talking about the hopelessness that so many of us young adults were facing and she said it's because we spent too much time looking at ourselves, making ourselves the victim, when the joy we were looking for would only be found when we spend time looking at Him, the Victim.

It was through those weekly meditations that she was giving during the Holy Hour at Assumption that really opened up my heart to the reality of a life of discipleship and even being really open to the vocation, to the priesthood. She didn’t speak about it directly, but just her love for the Church, for the Eucharist and for Our Lady really opened my heart. She just helped me understand what my life was supposed to be focused on and centered on. Through months of prayer, I came to realize that the Lord was calling me to be a priest. And of course, I was nervous and a little scared, not sure what to do. But I remember she was the first person that I told that I was thinking about being a priest. She said: “Do it.” She said, “I’ll pray for you but do it, be a priest.” And then when I told her that I was going to be a priest for the dioceses of Saint Augustine, she said “Be a holy priest.” I think that was the last time I talked to her. The last thing she said to me was “be a holy priest.”