Sr. Isabel Cuesta, SHM, Spain:  They always saw everything that she said to them as the most normal thing in the world.

Sr. Isabel Cuesta tells us some of her memories of Sr. Clare when they were together in Jacksonville, Florida. She was amazed by the gift that Sr. Clare had with children, especially those difficult to work with. She knew how to help them come out of themselves  and overcome their troubles. Sr. Clare never boasted about her talents, and Sr. Isabel thinks it was partly due to the fact that her mother taught her the importance of being down-to-earth.

I consider it a grace to have been able to live in community with Sr. Clare in Jacksonville, Florida, and in Valencia, Spain.

When I was with her in Jacksonville during the school year of 2008-2009, she taught religion in preschool, first grade, and second grade. She also prepared the second graders for their First Holy Communion.

She had a special gift with children. I’ll tell two short stories to give you an idea. 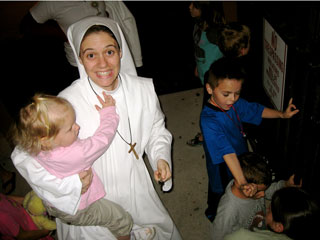 In the second grade class, there was a boy who never spoke. He had no physical impediment, he just simply never spoke. Sr. Clare felt very sorry for him, and she made it her personal goal to help this child to speak. At that time, Sr. Clare was teaching the children about the sacrament of Baptism, and this student had not been baptized. She spoke to them with such enthusiasm that he desired to receive baptism. I remember Sr. Clare imitating the hoarse voice of this child the first time she heard him speak, “Sr. Clare, I want to be baptized.” After that day, he spoke often with Sr. Clare, but only with her. He was finally baptized and became a happier and more communicative little boy.

The other story is about a boy who began to have problems in his family. Although he was quite calm before, after this he started to become a violent child. One day at school, he started a fight with another student. His teacher tried to calm him down, but things only grew worse. Finally he went out to the playground and remained there the entire afternoon. No one knew how to calm him down. The principal called our house to ask Sr. Clare for help with this situation. Sr. Clare went out to the playground and the boy didn’t run away from her. She started to speak with him. A little while after, he went and apologized to the principal and to the children he had harmed. I was amazed, and I asked Sr. Clare what she had said to the boy. She summarized the conversation, “I asked him if he wanted to harm the Heart of Mary and put thorns in her Heart. He said that he didn’t want to. So I asked him if he wanted to take out the thorns that he had placed in her Heart. He nodded his head. I said to him, ‘To take out the thorns from the Heart of Mary you have to first ask forgiveness from those who you have harmed.’ He agreed and went to apologize.”

Sr. Clare often spoke to children about the Heart of Mary and how our sins harm the Hearts of Jesus and Mary. She also taught them to do penance. They always saw everything that she said to them as the most normal thing in the world. In their child-like enthusiasm for the spiritual life, she sometimes had to stop the children when they wanted to offer up feeling cold by not putting on their jacket, or when they prayed for too long in the middle of the hallway before a picture of the Holy Father, because they had remembered when Sr. Clare told them that they had to pray for the Pope.

She also started the Rosary Club. Once a week, after school we would bring the children up to our Chapel. After giving them a short reflection, we would pray one mystery of the rosary together. The group began with twelve children, but shortly it extended to the whole class. Later on children from other classes joined us as well. 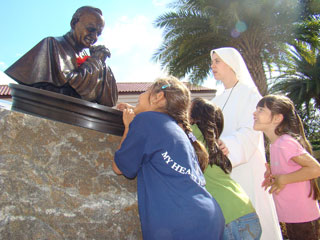 Sometimes we would open the tabernacle so they could see Jesus. Sr. Clare would encourage them to tell the Lord how much they loved Him. One child, when he saw the golden rays of the monstrance, said, “Jesus, I like your hat.” She used to tell us all these stories and she never got discouraged by the simplicity of her little students.

Over time, even when there was no sister to accompany them, the children would still come to our Chapel. One of the children would offer a short reflection, they would sing a song and pray one mystery of the rosary. At times, I was left speechless when I saw how those little children prayed. Sr. Clare didn’t stop to observe them. It seemed to me that she never fell into the temptation of attributing anything to herself. She would never do anything to draw attention to the gift she had with children. Sr. Clare had a great respect for the dignity of children. She was sincere with them and never tried to manipulate them or give them false praise. She treated young people in the same way.

It amazed me how she never became vain despite the many gifts she had, including her capacity to get along well with others. Once, I asked her if her artistic abilities ever got to her head. She shook her head firmly and said, “With Margaret, that was impossible.” Her mother, Margaret, was the person who providentially transmitted to Sr. Clare this down-to-earth attitude. Margaret was against artificiality and arrogance. Only once did Sister Clare trick her mother. One day, Margaret had to go pick Clare up from school, because Clare had supposedly been hypnotized. Clare couldn’t believe that her mother didn’t threaten her, ordering her to stop being foolish. Everyone really believed that she had been hypnotized. I remembered this story about Sr. Clare when the Sisters who went to the funeral in Derry told us about their conversation with Margaret. She said to the Sisters, “You all say that Clare was very good. But what you don’t know is that when she was little, she used to pull her sisters’ hair!” I think Sr. Clare smiled from Heaven saying, “That’s my Margaret!”