Do You Want To Come To My Wedding? 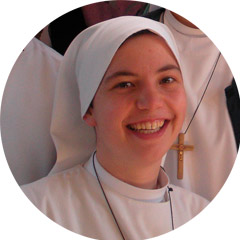 She told me: "That’s what we all need: to see ourselves as not important, to realize that we are nothing, and to place God in the center of our lives.”

Sr. Mary Rose is from California and entered as a Servant Sister of the Home of the Mother on May 23rd, 2010. She is currently in the community of Alcalá de Guadaíra in Seville, Spain. 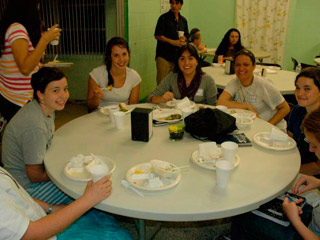 I met Sr. Clare during the Holy Week Encounter in 2010 that the Home of the Mother organized in Florida. The first thing that she said to me – with a lot of enthusiasm - was, “Do you want to come to my wedding?” At first it seemed a little strange to me until I found out that Sr. Clare was going to make her perpetual vows on September 8th of that same year.

I noticed that during the whole Encounter she said the same thing to everyone, “I wanted to invite you to my wedding on September 8th. Do you want to come?” Seeing her enthusiasm and the funny way she had of expressing her longing to give herself to the Lord has always caused me to grow in my desire to give my life to the Lord.

At that time (Spring 2010), I was studying at Ave Maria University and I had already felt God’s call for me to be a Servant Sister of the Home of the Mother. This anecdote (about the wedding) impressed me, not only at that moment, but during the last six years that I have been a Servant Sister. I remember this story when I start to think about my own “wedding day,” and it moves within me the desire to live it with the same enthusiasm that Sr. Clare did. From that moment on, when I speak to people about my perpetual vows, I always say, “God willing my wedding will be on this date. You are invited! Do you want to come?” And I always remember the first time that I heard it from Sr. Clare.

Sr. Clare, help all of the Servant Sisters to give ourselves to the Lord with the same enthusiasm and generosity that you did!

I have shared many moments with Sr. Clare since I met her in 2010, joyful moments and difficult moments. Thinking back on each of these moments, I can sincerely say that I  never saw her without a smile on her face, without her joyful laugh, or without the perfect joke in the right moment.

She always paid attention to the needs of others. She tried to make sure that we had a good time, but if it was necessary, she was not afraid to get serious and say things as they were. 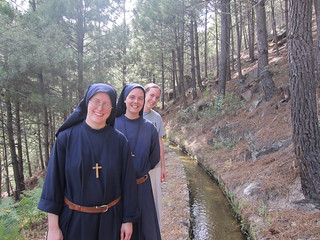 Sr. Clare in the English Summer Camp of 2012

I remember the summer of 2012. We were preparing the first English Camp that the Home of the Mother organized in Spain in Gavilanes (Ávila). Sr. Clare and some of the candidates (myself included) got sick with a very bad stomach virus. I remember that we were laying down on a few mattresses in a cooler part of the house. Even then Sr. Clare continued with her jokes.

I have another memory that same year, right before she went to Ecuador. I had just entered the novitiate. I asked her one day at lunch what she would say to a novice to try to help her live the novitiate well and how to make the most of each moment. She said that the best part about the novitiate is doing the humble tasks, the tasks that maybe are not important. She said, “That’s what we all need: to see ourselves as not important, to realize that we are nothing, and to place God in the center of our lives.” That helped me a lot.

I also remember a funny story. It is the adventure of the “used Kleenex.” I know that it is kind of silly, but it shows Sr. Clare’s great personality and her impressive talent to make us laugh in any situation.

One summer (I do not remember if it was 2010 or 2011) there were a lot of us girls spending time in Barcenilla, one of our houses in Santander. Sr. Clare was also there. One day we working or doing something outside. Suddenly Sr. Clare rang the bell, making all of us go to where she was. Once there, Sr. Clare said with a very serious expression on her face, “I’m very surprised and sad because of what I found in your rooms. I really thought that you all were better than this, I expected more from you. I can’t believe it, girls…” She continued on in the same way for a while.

I do not know what the other girls where imagining, but I began to think that she had found drugs in one of the rooms. Sr. Clare continued and continued, “I don’t know what we are going to do. This is really serious, girls, considering that most of you are candidates… We’re going to have to speak with Father Rafael and see what he says.” Suddenly, still very serious and raising her voice, she said, “You can’t put this under your beds.” She quickly took out of her pocket a used Kleenex that one of us had left abandoned in one of the rooms. When she did this, she cracked up laughing and we did as well. She had been capable of making us take part in the drama of the “used Kleenex.” The object of bringing us there was to make us realize that our rooms were really dirty. There were really a lot of used Kleenex under our beds. Of course, we could not leave things like that because we had to learn how to be clean and orderly… So we all went to clean our rooms, laughing and telling each other what we had thought while Sr. Clare was talking to us. We laughed a while thinking about the joke of the used Kleenex.