That was Sr. Clare: direct, but always with a sense of humor, and when she spoke like that it was always out of love and for the salvation of souls.

I was in the same community as Sr. Clare when we founded the community in Jacksonville, Fl (USA) on October 15, 2006. I lived with her that whole year, until we returned to Spain in June, with Megan Conway (now Sr. Megan Maria) who came with us to enter the novitiate that su mmer. 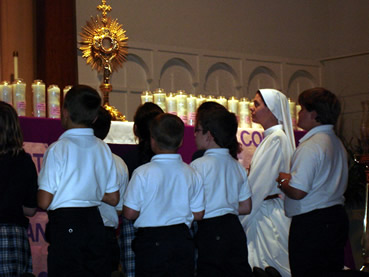 I remember that we spent that whole year laughing, because everything she discovered about the American character and their way of living seemed funny to her. She taught the children in the pre-school, kindergarten, and up to third grade. I went with her to her classes sometimes. She had an exceptional gift for speaking to the children about God, about Our Blessed Mother, about the saints… Thanks to her acting talents, she could tell them stories and the kids would really get into it. The same thing happened with her singing, to such a point that a little boy, literally, wanted to become a Servant Sister because of her.

She constantly had the attitude of doing everything with energy, joy, and generosity. We always encouraged one another with expressions like, “Let’s go for it!” Whenever something became difficult, unpleasant or arduous, she would often say, “That’s ok. In reparation for my sins.” I also remember that she was very sensitive to the sufferings of others, and always tried to help right way. When we went grocery shopping for the community there, since there were so many good things to pick from, she would always make comments while choosing the less expensive and poorest things, and make funny faces and crack jokes about the expensive and luxurious things.

I also remember the gift she had for talking to people when it came to doing apostolate. We were very close friends with one of the teachers there. Her husband was Jewish. Ever since we met him, Sr. Clare always said things to him, half-joking but at the same time very seriously, to make him think about his faith. He laughed a lot with her, listened to her, and the things she said to him started to sink in. The teachers organized a party before Christmas break, and their spouses came as well. They also invited us to the party. When we saw this teacher’s husband, Sr. Clare said, “Hey! Christmas is so beautiful… Do you like it?” To which he answered, “Yes.”  Then Sr. Clare said, “By the way, did you know that on Christmas we celebrate the fact that the Messiah has been born, and now he’s 2007 years old? Hehe…” I still remember his thoughtful face, a little bit in shock. But he started laughing and didn’t take it badly. That was Sr. Clare: direct, but always with a sense of humor, and when she spoke like that it was always out of love and for the salvation of souls.

Another story I remember is about the Eucharist. They invited us to a vigil with Adoration of the Blessed Sacrament in a parish. In the moment when they exposed the Blessed Sacrament, they place the consecrated Host in a normal glass dish, just like that. I remember that when we saw it, her expression changed drastically and she started to cry. She was about to get up and go say something to the priest in that moment, but Sr. Teresa decided it would be more prudent to talk to him afterwards.

As far as hard work is concerned, I remember working with her that summer, 2007, when we came back to Spain from the United States. We used to go almost every day to help the Servant Brothers in the reconstruction of their house in Las Presillas, doing various different jobs. It was hard work, but she - although she didn’t have a very strong physical constitution - never stopped for even a moment, despite her tiredness. She often even sought out the toughest jobs to do. And she always did it with joy, making jokes, singing…

I never heard her speak poorly about another sister. On the contrary, she always defended all the sisters.