She was a joyful soul 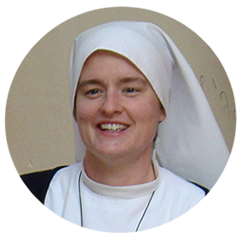 Sister Clare wanted to light up someone´s day in such a way that the other person just experienced the joy of feeling loved, without realizing that it was a “favor.”

Sr. Alison is from Virginia (United States) and entered the Servant Sisters in 2008. She is now in the community of Valencia (Spain). 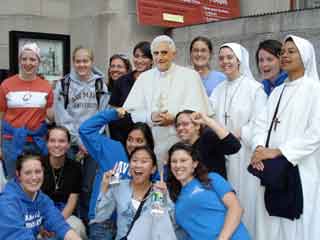 I met Sister Clare for the first time on a pilgrimage to New York in 2008. I wasn´t a candidate yet, but I had started getting closer to the sisters. I had heard some of the girls in Ave Maria University talk about Sister Clare, and everyone loved her, so I was excited to meet her after hearing so much about her. The truth is that I don´t remember too much about her in particular on this trip, but I do remember her joy, that she was always singing, and that we had a great time whenever we were around her. She was really, really joyful and caused that same joy in everyone around her.

I remember one night we were staying at the convent of the Little Sisters of the Poor in Queens, New York, and we were all really tired after a long day. At this time I was fighting against my vocation; I didn´t want to accept it, and had not yet surrendered my will to God´s. When we arrived at the convent that night, we went to the chapel to pray night prayer, and I remember that I was sitting next to Sister Clare. She was falling asleep while we prayed the psalms, and I remember that in that moment the Lord gave me the grace to want to be like these sisters, to be able to wear myself out for God, to give my life like I experienced in this moment that Sister Clare was doing.

I also spent Christmas of 2008 in Jacksonville, Florida, as a candidate. I remember something that happened with Sister Clare and all the candidates. There was a woman who sang at the Masses in the parish in Jacksonville, and Sister Clare said that she often saw her alone. She would spend time in the office or in her car between Masses, almost always alone, and sometimes she would even sleep in her car to pass the time. Sister Clare wanted to go and cheer her up a bit, and all the candidates went with her. I remember that what impressed me the most was that Sister Clare wanted to cheer her up in such a way that she didn´t realize that we were trying to help her. All the candidates went to the parish with Sister Clare and we walked by her car and saw her sleeping inside. Shortly after, she had to go to the parish office to get something, and so we all accompanied Sister Clare to the office. Sister Clare’s excuse was that she was looking for something for the guitar. If I remember correctly, I think it was the tuner or something like that. So we met up there and Sister Clare started chatting with her, as if it were a mere coincidence that we were all there. Everyone who knew Sister Clare knew that she was a joyful soul and that she spread that joy everywhere she went. I think we finished off by singing a song and everyone ended up laughing. But what really amazed me was that Sister Clare wanted to light up someone´s day in such a way that the other person just experienced the joy of feeling loved, without realizing that it was a “favor.”