What Can I Give to Others? 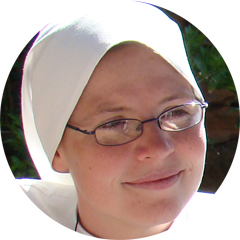 I still remember the fire with which she spoke to us about the damage we cause ourselves with all the masks we constantly put on.

Sr. Annemarie is from Florida (United States) and entered the Servant Sisters on March 15th, 2009. She is now in the community of Brignano, Bergamo (Italy). 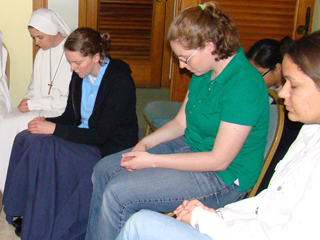 Sr. Annemarie in a youth meeting

The first thing that struck me about Sr. Clare, besides her sense of humor and how she could instantly make anyone feel comfortable around her, was the way she spoke about the Lord. Let me explain. Among many Christians in America, including many of my friends and sometimes even myself, there was a very strong tendency to speak about Jesus Christ in a very light and almost superficial way, so much so that it could even become a lack of respect at times- although that was not our intention. It’s obviously a good thing to have a friendly and even intimate relationship with the Lord and to speak of Him with familiarity, but not to the point of trivializing His dignity as the Son of God. For example, at that time there were some t-shirts that had become very popular that said, “Jesus is my homeboy.” I don’t have any particular memory of Sr. Clare directly criticizing this mentality (although she probably did, and would have been right in doing so) but I do have a very clear memory of how she herself referred to Jesus. She always called Him “Our Lord.” Sr. Clare was very expressive, and could make all kinds of faces when she made a joke or was just playing around. But when she spoke about “Our Lord” she only had one face: you could see in her eyes that she was in love – not in a superficial or cheesy way, but with a kind of solemn tone. And she couldn’t stand it when others spoke about the Lord with anything less than love or respect. This aspect about her had an impact on me from the beginning. 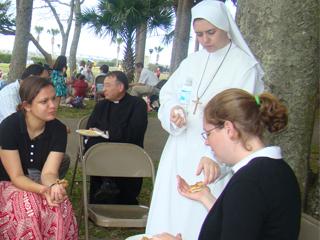 Sr. Clare with Sr. Annemarie when she was a candidate.

She used to speak to us girls often, and sometimes very sternly, about the dangers that come from living superficially and always worrying about our image. You could tell it was a topic that she carried deep in her heart. As I got to know her better, I realized that she spoke to us in this way because she wanted to save us from having to go through all the suffering that she did in her own worldly lifestyle, before knowing the Lord. In fact, the first formation meeting that she gave to the group of girls of the Home of the Mother in Jacksonville was about hypocrisy and falseness. I still remember the fire with which she spoke to us about the damage we cause ourselves with all the masks we constantly put on. There was another meeting that she led about the true sense of beauty. She had a special place in her heart for the girls who had been deceived by the world and lived a superficial life. Several girls come to my mind whom she had helped escape from that slavery. Many times, when we met a girl like that, we would say to one another, “She’s got to meet Sr. Clare.” And Sr. Clare suffered greatly when she saw girls who chose not to respond to what the Lord was asking of them. Sometimes she would ask us to pray for this girl or the other, who was struggling to break with her worldly ways and live a Christian life.

Another thing Sr. Clare taught us when I was a candidate was to have a generous attitude and willingness to give at all times. I remember one meeting when she said, “Each time we sit down to have a formation meeting, an activity with young people, or even just at the lunch table, our first thought should always be, ´What can I give to those around me in this situation?´” Over these years since I became a Servant Sister, I have often heard Sr. Clare’s voice in my mind reminding me of this little piece of advice. Spending just one second to think about how she put this philosophy into practice in her own life has always helped me to find the strength to conquer my own laziness, shyness, etc.