She Gave Herself to God Once Again 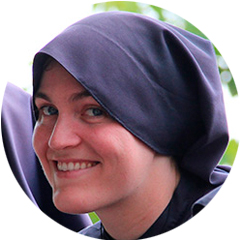 Whenever Sister Clare had given me advice, help and counsel, her reference was always the life of Christ.

Sr. Sasha Smith is from California, United States and is a Servant Sister of the Home of the Mother. She met Sr. Clare in 2007. 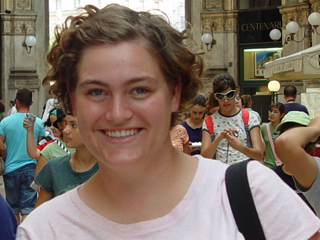 I met Sister Clare when I was seventeen years old. She had a special joy and way of laughing at everything that made me want to stick by her side. I realize now, looking back, that she would laugh and make jokes about everything to help me not make mountains out of mole hills and live those everyday duties, that at the time were really hard for me, with a cheerful spirit. She spent all day singing and cracking me up with her funny remarks and stories. I never grew tired of asking her all kinds of questions, because she was a person who was easy to trust and having her at your side, she would make everything easier and more joyful. I remember that she surprised me a ton of times by answering my questions with the reply that she was indifferent. It was totally new for me to hear someone answer in that way, putting whatever God wanted before their own likes, dislikes, or desires. It made me grow in admiration towards her and towards the Servant Sisters of the Home of the Mother.

Sister Clare told me that during her novitiate, one of the greatest graces that she had received was that Our Lord gave her an interior understanding of her own nothingness. I remember that she repeated the same words that the Lord had said to her: “You are nothing.” She had also shared with me that during her novitiate, Sister Reme, the Mistress of Novices, had invited all the novices to write down everything that they thought the Lord would never ask of them. She then explained that they would see – sooner or later – that the Lord would ask them to give even what they never imagined that the Lord could ask of them. Sister Clare told me that that had been exactly the case in her life. 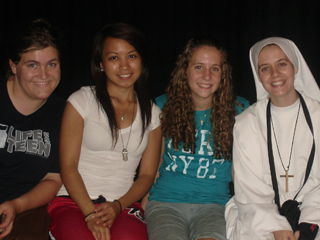 Sr. Sasha with Sr. Clare during a pilgrimage to New York.

During the time in which I was discerning my vocation to the religious life, I went through a really rough period of time in which I experienced that it was impossible that Jesus could love me as His spouse. I hadn’t been able to tell this to Sister Clare, who at that time was my spiritual director, and this was very hard for me. But one day, I called her to talk about other things and as soon as she got on the phone, the first thing she said to me was that, in prayer, she had experienced that Jesus asked her to tell me that He does not reject me. I know that it’s something anyone could have told me, and it’s true, because Jesus doesn’t reject anyone. Yet this was an enormous moment of grace for me, in which the Lord wished to use Sister Clare as His instrument. It was a kind of launching point for my soul and a spiritual aid so that I could continue my discernment with greater trust and confidence in the Lord and in His love for me.

Whenever Sister Clare had given me advice, help and counsel, her reference was always the life of Christ. The principles that she gave me were always taken from the Gospel. She taught me the importance of living everything in Jesus Christ. This led me to progress in charity with others and to have a stable peace in my path of following Jesus. I have many examples of this.

It just so happened that many times while I was talking with her, in the middle of our conversation, groups of kids would come up to us, offering Sister Clare flowers that they had picked for her. She would give them a huge smile and without hurting any of the kids’ feelings, expressed her desire that the flowers be taken to Our Blessed Mother. She had a contagious way of spreading her love for Our Blessed Mother.

I am conscious of so many times in which Sister Clare denied herself to be there for me, to listen to me, and to help me. In this sense, I perceived that she was the best friend that I had. She had an incredible patience and goodness towards me, and I have to say that I have learned many things from her example.

Sr. Clare with her family during the pilgrimage to Ireland.

During the first girls’ pilgrimage to Ireland that the Home of the Mother organized, Sister Clare gave me an extraordinary example by putting others before herself in moments of interior suffering, in other words, she practiced a sincere and profound Christian charity. We visited her family, and for some of her relatives, it was the first time that she had seen them in years. When it came time to leave, as is understandable, I could tell that it was a hard moment for her to separate from some of her family. It was as if she were giving herself over to God once again. Just as we were getting on the bus to leave her hometown in Ireland, I remember thinking to myself that she looked like she was going to begin to cry, which would be totally understandable. However, I witnessed how she overcame this moment by standing up in the bus in front of all the girls on the pilgrimage, taking the microphone and singing one of her favorite songs called, “Let it be done into me.” That moment was an expression of her joyous triumph at saying “Yes” to God once again – this really had an impact me.