A Godmother in the Faith

Isabel Ibáñez:  She was a strong woman. Her words had strength. She had wisdom to shut your mouth and look down on you, and yet she didn't do that. I was a imperturbable teenager with a similar ability to speak out and with a clarity of ideas, and I saw that she had the same ability but used it differently.

Isabel Ibáñez Valle is a 27-year-old teacher and catechist in the Diocese of Santander, Spain. When she was seven, she met Sr. Clare, and participated in several Home of the Mother activities with her throughout her childhood and teenage years. 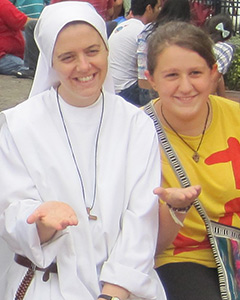 Providentially, we were in the same group on the World Youth Day trip in Madrid. We connected on a human level of course—I was a 17-year-old girl who had been going to things with the Home of the Mother and had been a member for ten years. A lot of people knew me because of my sense of humor. I was a bit like her in that sense. Both of us shared that sincere humor of laughing out loud but being able to become silent and talk seriously about Love in seconds. She used to say that she rediscovered me that WYD trip, and for me she began to be a point of reference. I wanted to be completely surrendered like her. I did not think of a religious surrender to the consecrated life or any specific vocation. I wanted—and still want—that self-giving to those around me. She knew how to place herself at your side, like when we teachers squat down to look into the eyes of the children, as the Lord did when He called us all: come down, seduce and accompany. That is what I felt during those days. I got to know a friend who laughed with me; who, while she translated testimonies, could look at me and control her expressions and not burst out laughing at mine; and who, when the testimony got deep, could look at me without changing her serious expression effortlessly. I was a really “cool” teenager and didn’t like to get attached to people. But I do remember that she had that magnet that drew you toward her. Yet she was a free magnet that didn’t stick to you. Christ alone can do that. 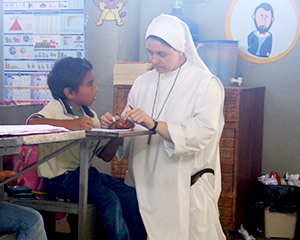 The year following World Youth Day I did not see her much. I saw her at the Holy Week Encounter and few other events, until the moment arrived when she left for Ecuador. I don’t remember when or how I found out, but I did feel that part of my heart broke. She was a sister I didn’t feel judged around. I was comfortable talking to her. She was a friend, and she was leaving. She left in October, and in February I had my plane ticket to Ecuador. And here comes the best part. I landed in Ecuador at the beginning of August 2013. I went on a mission trip with other Spanish girls. When I got there, all I wanted to do was see her. Sorry for being so honest, but one of the reasons I crossed the pond was because my "holy vandalism" partner was in Ecuador.

But she was different. She really was. The day we arrived, she was at the school with some children. She spoke in simple terms, using sentences that caught you in your tracks but were so full of love. I have a picture of her helping a boy seated at his desk, doing homework. She didn’t like when we took pictures of her, but thank God we did. They are treasures for me now. I remember that that trip was hard but full of Grace. What I remember most—and I remember it even before Sr. Clare went to Heaven without warning us—was the farewell. We had time for prayer that morning in a chapel near the candidates’ house. I think Sr. Clare led the meditation, but I’m not completely sure. I am sure that she sang “Solo hay una cosa importante, solo hay una cosa mejor—One thing is important, one thing is best,” and that’s when I started to realize that it was our goodbye. That song was being etched in my heart as I listened to it, while the Lord asked me quietly to keep that moment under lock and key. When we came out of the chapel, we said goodbye to the Sisters. I did not want to say goodbye to her. I wasn’t going to cry on the last day! But the Lord knows best. We exchanged glances and we had no choice but to hug each other. I knew it, I knew that we were not going to see each other again. The following year—2014—I left the Home of the Mother. So, for the following years I thought that the Lord had warned me because He knew that I would leave the Home. But on the day of the earthquake, when my sister told me about it, that farewell took on its full meaning. 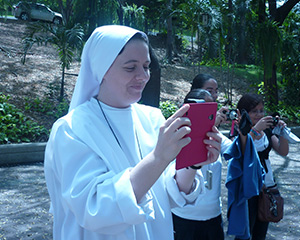 In broad strokes, these are my memories of her. In summary, I knew, lived and loved Sr. Clare like a godmother in the Faith. She was a strong woman. Her words had strength. She had wisdom to shut your mouth and look down on you, and yet she didn't do that. I was a imperturbable teenager with a similar ability to speak out and with a clarity of ideas, and I saw that she had the same ability but used it differently. Her passion, in the broad sense of the word, and dedication she felt and made evident when she joked around is something I always admired and have asked for myself: to make others laugh, denying myself, making them smile and seeking their happiness and holiness.