Sr. Kelai Reno:  Sr. Clare and I were walking down the hallway trying to get our bearings when all of a sudden we saw a woman coming toward us, crying.

One morning, Sr. Clare and Sr. Kelai had to bring Holy Communion to a sick person at the Hospital Clinic in Valencia. Disoriented, they got lost in the hallways. Well, they thought that they were lost, but—like Sr. Kelai Reno, SHM, tells us—“the Lord knew exactly where He wanted to go.” 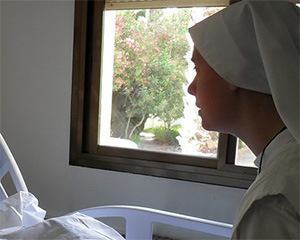 When I lived with Sr. Clare in our community at Valencia, we had just opened the house there and everything was new for us. At the time we were working at two hospitals: the Hospital Clinic in the city of Valencia and the Military Hospital in Mislata. We visited the sick and brought them Communion.

One of those first days, Sr. Clare and I went to the Hospital Clinic, but we got lost in the hospital’s hallways. She was carrying the Blessed Sacrament, which she always held against her chest under her habit’s scapular. We were walking down the hallway trying to get our bearings when all of a sudden we saw a woman coming toward us, crying.

She took us into the room where her father had just passed away and told us that she had just asked Our Lord to send someone to help her. When she went out into the hallway, she saw us. She did not mean medical help, because she already had that. In fact, there were nurses in the room. She explained that she meant help for her father’s soul and her own, because she was alone there without her family.

At this point, Sr. Clare said to her, “You asked for help and thought that we were that help, but it is the Lord Himself who came out to find you to be here with you and your father,” and took the pyx out from under her scapular containing the Blessed Sacrament. When she realized that sister was carrying the Lord with her, the woman began to cry tears of gratitude because the Lord Himself had wished to come and console her. The three of us knelt down at the bedside and prayed for her father’s soul before the Blessed Sacrament. She was so thankful.

Sr. Clare was very touched by this incident. The Lord’s providence amazed her. We thought that we were lost, but the Lord knew exactly where He wanted to go. When we got home we told the other sisters. She remembered and told the story months and years later. She always emphasized lovingly how the Lord seeks us out and goes out to meet us.