Sr. Beatriz Liaño, SHM:  I can still see the scene: Sr. Clare laying on the back seat with her eyes closed while the taxi started up. When I saw her again after a few hours at dinner, she was serving the girls and telling jokes and spreading joy.

Sister Beatriz Liaño was the person in charge of the Home of the Mother girls’ pilgrimage during World Youth Day 2011 in Madrid. Sr. Clare’s dedication to the girls she served culminated in a faint in the middle of the street after Mass with Benedict XVI at Cuatro Vientos. Sr. Beatriz tells us what happened.

I lived World Youth Day 2011 Madrid very close to Sr. Clare. Honestly, those two weeks were exhausting. There were 10 sisters to attend to 140 girls. Before WYD began, we went on a weeklong pilgrimage to different parts of Spain. When Benedict XVI arrived to Madrid, we joined the WYD program, which included long walks, masses of people and long lines under the relentless August sun in Madrid that can melt asphalt. 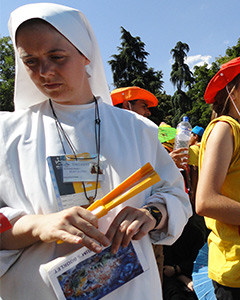 In addition to the regular tiredness experienced during those days, we sisters added the constant effort to serve those young women and help them have an encounter with God that would change their lives forever. To be honest, my most beautiful memory of Word Youth Day is the unconditional and self-denying surrender of the team of sisters. I am sure that if our pilgrimage bore so many fruits of conversions and vocations it was thanks to Benedict XVI’s prayers in the first place, and along with them, the sisters’ generous sacrifice. Of all the sisters, Sr. Clare stood out.

I remember that after the WYD closing Mass on August 21, 2011, at Cuatro Vientos Airport, we found ourselves before a great difficulty: returning to our lodging near Atocha, the metro station. Foreseeing this problem, we had planned to charter buses to transport us downtown quickly, but the city council forbade traffic around Cuatro Vientos in order to avoid standstill traffic in Madrid. The only way to get out of there were your feet or the Metro, but the Metro was so packed that you could not even go down to the platform. All we could do was walk the never-ending Avenida de las Águilas—4 kilometers—at a reasonable pace until Aluche Station. From there there had to be some way to reach Atocha.

Walking and walking, a moment came in which we began to see Aluche in the distance. There was still a while to go, but at least we could see our goal. All of a sudden, one of the sisters ran up to me saying, “Sr. Clare fainted in the middle of the street. She can’t breathe.” I ran to the place she indicated. At the end of the columns of girls and sisters who were following me, I found Sr. Clare. She was sitting on the sidewalk with her head in her hands. She probably had a tremendous migraine.

She was very exhausted. She had not said a word about how sick she felt and did not utter a single complaint. I could not ask her to take one more step. But how was I going to get her out of there and bring her somewhere to rest as soon as possible? I remember praying, “Lord, please help us.” At once, before my very eyes, a taxi with a green light indicating its availability appeared. Either the traffic ban was lifted or we had just reached an area where driving was permitted. Whatever it was, the fact that an unoccupied taxi appeared before our eyes that crazy afternoon was an authentic miracle. I almost asked the driver what angelic choir he belonged to…

I jumped in the middle of the street to stop him and made Sr. Clare and another sister get in. I can still see the scene: Sr. Clare laying on the back seat with her eyes closed while the taxi started up. When I saw her again after a few hours at dinner, she was serving the girls and telling jokes and spreading joy. Not a complaint, not a reproach, no signs of feeling victimized.

Yet I feel obliged to add a word. Sr. Clare’s reaction that day was not an isolated case. Those of us who knew Sr. Clare know that that was her normal attitude and the way she normally reacted and surrendered herself, to the point that she fell to the ground exhausted.