Sr. Isabel Cuesta, SHM, Spain:  Her classic response was: "Sure! Of course!"

Sister Isabel Cuesta lived with Sister Clare in the community that the Servant Sisters have in Torrent, a town in Valencia, Spain. Sister Clare had recently taken her perpetual vows. Conscious of having given herself entirely to the Lord, she wrote a "blank check" to the Lord every day. In this community, Sister Clare was dedicated to chaplaincy at the Hospital for Chronic Illnesses in Mislata. Sister Isabel tells us some anecdotes about the way Sister Clare interacted with some of the patients: with Paco, who had terminal AIDS, and with Rafael, a schizophrenic.

I lived in the same community with Sister Clare in Torrent, Valencia in Spain. It was the year we founded the community in 2010-2011.

We arrived in Torrent in October 2010. Sister Clare had just taken her perpetual vows on September 8th of that same year. She had totally given herself to the Lord, and her way of living this out was doing everything with all her soul. Although she was not particularly skilled at manual labor, she made a big effort in manual labor, as well as in her apostolate. For her, obedience was the practical way of giving herself entirely to the Lord.

I remember two expressions of hers that can help us see her interior dispositions: 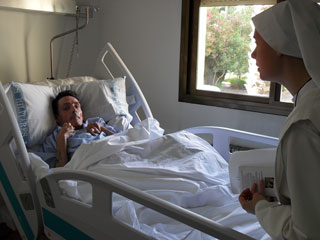 1. Every day, she offered the Lord a blank check so He could ask whatever he wanted of her. And since she did not want to deviate from the will of God, she asked the Lord every day to change her plans. So, when this happened, she reacted by immediately overcoming any inconvenience.

2. Several times I asked her if she would be willing to do this or that (things that would be a great sacrifice for her). Her classic response was: "Sure! Of course!"

She had understood perfectly that she belonged to the Lord. She did everything with great generosity and enthusiasm. And she did not simply feel like doing so thanks to her cheerful and expansive character. The proof is that she very often suffered from migraines, but this did not change her character or diminish her activity: she continued to do what was entrusted to her. In fact, very few people knew that Sr. Clare suffered from migraines.

I also want it to be known that she had great charity and delicacy with others. Because of her sense of humor and the education she received, it would have been easy for her to make fun of some characteristics of the people she encountered. It is true that her laughter came out naturally, but she knew how to turn the joke back on herself and laugh at herself. In a certain circumstance, someone asked a question that made us laugh a lot because it was totally illogical. When we stopped laughing, we realized that the person who had asked the question felt bad. Sister Clare concluded by saying: "I thought I was the only one who asked questions like that!"

In Torrent, Sr. Clare was entrusted with the chaplaincy at the Hospital for Chronic Illnesses of Mislata. She devoted herself to this apostolate with a lot of enthusiasm, like everything she did. She was full of love for God and zeal for souls. And since she was overwhelmingly kind, all the doors were opened to her. I learned a lot from her interior freedom when it came to apostolate and the way she approached people. Personally, I know that I owe a lot to the example Sister Clare gave me.

I remember telling her a dream I had one night. I saw myself next to a kind of lagoon in a large cave. Inside the lagoon, there were many people who held out their hands to us, asking for help. I was about to put out my hand, when I realized that if they grabbed my hand, they could seize me and take me into the water where they were. In spite of their unfortunate situation of need, I understood that in order to help them, I could not let myself be seized by them. Sister Clare always remembered this dream. The patients in the Hospital for Chronic Illnesses spent long months of uneasiness and inactivity there, and Sister Clare provided them with distraction and comfort. However, she understood that she could not to let herself be "seized" by the emotional needs of the patients. She had to remain in her place as a religious sister. Sister Clare began to add the necessary discernment to her generosity of heart.

Of all the patients she worked with, two were very special: Paco and Rafael. Paco was about 40 years old and had terminal AIDS. He was very aloof and stubborn. He spoke very little and when he spoke, it was almost always to say "No!" We learned that he had been in jail for crimes related to drug use. Little by little, Sister Clare pushed her way into this man's heart. He ended up going to confession, and became a man of simple and continuous prayer. He also developed a great love for the Eucharist.

Rafael is another patient who had severe mental disorders due to schizophrenia. He had a very kind and thoughtful personality, and he accepted in his own way the image of God that Sister Clare presented to him. He began to receive the Eucharist with great devotion. He composed songs and poetry in which Sister Clare was a heavenly creature, sometimes confused with the Virgin Mary. Sister Clare had a beautiful relationship with him, but she did not forget her purpose. She somehow managed to find her way through Rafael's hazy thought and point out reality and truth in a way that Rafael understood and accepted. His psychiatrist considered their relationship as a top-quality therapy. When Rafael returned home after his medical discharge, the psychiatrist personally took it upon himself to mail Rafael’s letters to Sister Clare.

These cases are just to give a taste of the capacity Sister Clare had to do good to all kinds of people. It is true that she had a very personal and very extraordinary charisma. But it is not simply a matter of psychological abilities. She had a sincere and deep love for the good of others, and she knew that Jesus Christ is the greatest good of the soul; she had experienced it for herself. She had a great love for God and His interests. She irradiated authenticity and coherence. These qualities inspired me to esteem her greatly, and I do not think I am mistaken if I say that these virtues opened the hearts of those who met her.