Sr. Sasha Smith, SHM:  Sister Clare was my spiritual director from when I was seventeen years old until I entered with the Servant Sisters of the Home of the Mother. So I have had the grace to have spoken with Sister Clare a lot of times on a more personal level.

Sr. Sasha Smith had the great grace to be guided on a spiritual level by Sr. Clare, who helped her discovered her vocation. She met Sr. Clare when she was 17 years old. In several articles, she will tell us some of her memories of Sr. Clare.

I met Sister Clare for the first time in Spain in the summer of 2007. I was seventeen and it was my first time being so far away from home. She picked me up from the airport with another sister; my first impression of Sister Clare was that she was a very friendly and welcoming person. She had a gift that made people feel really comfortable around her.

I think the best way to describe Sister Clare would be to say that she was a person with an extraordinarily big heart. She had a universal heart that didn’t know how to exclude to anyone. She brought out the best in everybody around her thanks to her joy, her sense of humour. At the same time she was very sensitive towards others. You could say anything you had in your heart, as insignificant as it might have been, but she really listened to you. She cared for the littlest thing you could say to her. 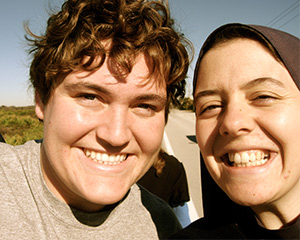 Sister Clare was my spiritual director from when I was seventeen years old until I entered with the Servant Sisters of the Home of the Mother. So I have had the grace to have spoken with Sister Clare a lot of times on a more personal level. Some of the most helpful things Sister Clare said to me, she said to make me laugh. She constantly would say things to lift up my spirits and help me to not give importance to things that in the end, really don´t matter. I remember that the simplest thing - like washing the dishes together - would end up being a time of singing, and then we would die laughing. Everything became easy and joyful when I was with her.

A lot of times when I was going through more difficult moments in my life, even when they weren’t specifically spiritual, she was the first person I would think to talk to. She was so centered in God and I knew I could trust her to never tell me what she thought I wanted to hear; that wasn't her style. It was really clear that the only persons Sr. Clare cared about disappointing were Our Lord and Our Blessed Mother.

I think the greatest gift she has left for everyone is her own testimony of how she responded in her life to the experience of God´s love: the way she lived, the response of her life to God's love. She would always repeat to me, “Nothing is an impediment for God to love you.”