Giving It All with an Amazing Sense of Humor

Sr. Ana Maria Lapeña, Spain:  Everyone remembers Sr. Clare’s cheerfulness, her gifts as a “people person,” her sense of humor, her imagination… However, in addition to all that, she had a number of virtues that you could only admire in her by living with her on a daily basis.

Sr. Ana Maria Lapeña, SHM, was Sr. Clare’s superior during the 2011-2012 academic year at our house in Belmonte (Cuenca), where we run a residence for girls and young women from low-income and/or dysfunctional families. Sr. Ana Maria describes the amazing virtues she observed in Sr. Clare while she served as superior of the community: her obedience, her spirit of service and sacrifice, her charity, her love for souls… She offers a very accurate definition of what could be called Sr. Clare’s “spirituality”: “Giving it all with an amazing sense of humor.” This is without a doubt one of the best descriptions of Sr. Clare we have yet published on this site. 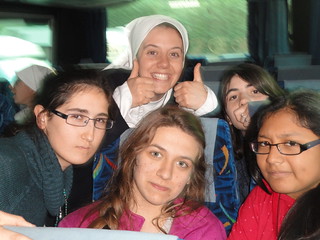 I was blessed to live with Sr. Clare for one year. We were both sent to the community in Belmonte (Province of Cuenca, Spain), during the 2011-2012 academic year. I was her superior.

I remember her as a Sister everyone enjoyed being around. I was younger than she was, both in age and in years as a Sister in our order. At first, I thought that this could make it harder for her to obey me, but that was not at all the case. Everyone remembers Sr. Clare’s cheerfulness, her gifts as a “people person,” her sense of humor, her imagination… and she certainly did possess all these natural gifts which she placed at God’s service. However, in addition to all that, she had a number of virtues that may have stood out less at first and that you could only admire in her by living with her on a daily basis. One of these virtues was her obedience. She only had one way of responding to anything that was asked of her: a smile and the words, “Of course!” I still have no idea what things were harder or easier for her because she always reacted the same way, no matter what you asked of her or the circumstances at the time. At the end of that year, I thought, “I want to learn to obey like that.” What I saw in her was exactly what we profess in our vows: a speedy, joyful, unconditional, and constant obedience.

She was always observing to see what others needed. I remember how I often had to resolve problems that had arisen among the girls we have under our care. Right then, Sr. Clare would come up to me and ask, “Sister, what do you need?” I would tell her what was worrying me and she would say, “Would you like me to try and think of a solution?” She would go off and then come back telling me her idea. What most impressed me was the effort she made to observe, and then try and solve the problem. She never limited herself to just fulfilling her own duties. She always observed and tried to solve problems. She did this in our community life as well. She always made the effort to elevate the conversation and make the other Sisters laugh. Another aspect that stood out in her was her merciful attitude towards the Sisters. 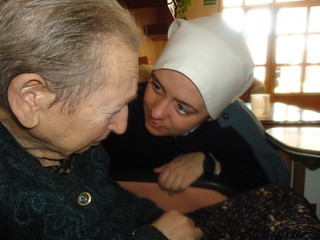 During a visit to the nursing home in Belmonte

Everyone was important to her. Children adored her, but they were not the only ones who received her attention. For her, everyone was important: the troublemaker on the sidewalk, the old lady that passed by her side, the local high school teacher, a child, the restaurant owner… She always found a way to get to know them so she could lead them to God. She loved everyone with her entire heart. She was never indifferent to anyone’s suffering and she never wanted to make anyone suffer.

She was an extremely selfless person. She never thought about herself. She often had migraines and many times we would see her singing with the guitar, making the girls laugh, playing… and then five minutes later she would be vomiting in the bathroom from the excruciating pain of her migraine. She never stopped doing what she had to do with joy, in spite of the pain. Sometimes, this was a limitation for her. At times, she was obliged to go and rest in the dark because of these migraines. I never saw her feeling sorry for herself or making a big deal about it. As soon as she felt a bit better, she was back to work, giving it her all.

She was fond of the writings of Fr. Segundo Llorente, a Spanish Jesuit who spent years as a missionary in Alaska. That academic year, she read his book “40 Years in the Arctic Circle” more than once. She loved that spirituality of giving it all with a great sense of humor.

That year, she prepared a group of children for their First Communion. She managed to inspire them with a great love for Jesus in the Tabernacle and a fervent desire to receive Him. 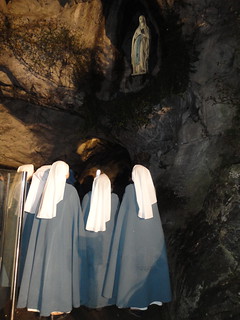 During the trip to Lourdes

That year, Sr. Clare had a strong experience of Our Mother Mary. We went on a pilgrimage to Lourdes with the girls and we went to the baths. For her, it was an incredibly strong experience of Our Lady that lasted her the rest of the year. In that same trip, she did something that really impressed me. We had been on the bus for hours on end. She had been talking with the girls, singing, livening up the atmosphere on the bus… It was on that trip that she made up a series of stories about “Sor Clor” to make the girls laugh. Towards the end of the trip, I proposed that the girls try and make up a song, but a lot of them were feeling carsick and we ended up not doing it. This was of no significance to me and I completely forgot about the subject. However, a few days later, she came and told me, “Sister, I’m sorry for not helping you make up the song. I felt really carsick, but I should have helped you.” I didn’t even remember about all that. On top of it, she had made such an incredible effort trying to liven up the trip and help pass the time during the whole car ride! Yet, she still thought she should have given more. This was a small gesture, but one that showed her delicacy in obeying. She did not want to deny Jesus anything.

She never saw anything as impossible and she had an amazing confidence in the generosity of others. I remember how ordinations to the priesthood were going to take place that year. The Monastery of Priego, where we normally lodged guests, was occupied. Mother Ana told me she was trying to figure out how to work things out and asked me what possibilities of low-cost lodging there might be in our nearby town of Belmonte. I told her that I’d look into possibilities. I told the Sisters about the dilemma, commenting, “I honestly think it’s going to be difficult,” as we had to find places for Servant Sisters, Servant Brothers, and families. She said, “No, Sister. You’ll see how they’ll help us out.” She went out and came back a few hours later. She had managed to convince several people to open their homes and hostels completely free of charge. Even so, there was still a lot of work left to do – moving tables, chairs… We were worn out from the academic year that had just ended and the situation was definitely a bit overwhelming, but she never wasted time complaining. She always saw everything as possible. She never lost her calm or cheerfulness in the midst of all that work.

I often saw her looking at the drawing the Sisters had made for her on the occasion of her perpetual vows.