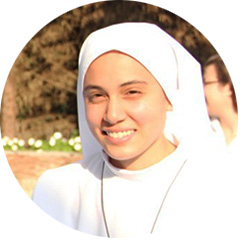 Sr. Clare knew how to correct the girls and was never afraid to say what she had to say, but she always managed to win people over.

Sr. Rachel is from the United States and entered in the Servant Sisters of the Home of the Mother in 2009. 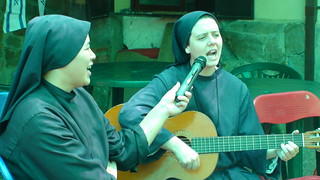 Sr. Clare during the English Camp of 2012

Sr. Clare once told me how much she learned from something that Our Lady told the girls during the apparitions in Garabandal. Our Lady led the girls up to the choir loft inside the church and told them to jump off. The girls didn’t jump, out of fear. Our Lady later told them, “If you would have jumped, you would have flown.” I think these words helped Sr. Clare have confidence and embrace whatever Our Lord and Our Lady asked of her.

During the English Camp in 2012, I was the team leader of a group of 13 and 14-year-olds. Just two days into the camp, I started having lots of problems with them. They started acting up and I didn’t know what to do about it. Sr. Kristen, who was the Camp Leader, asked Sr. Clare to have a talk with my team and me. Sr. Clare was very firm with the girls. I feared that after this they might get upset and be even more defensive. Their faces seemed to say, “I can’t believe this nun is talking to us like this.” However, just two days later, Sr. Clare had already managed to win them over with her incredible sense of humor. At every meal, the girls would start shouting, “Sor Clor! Sor Clor!” Sr. Clare had invented this nickname for herself. All the girls wanted her to sit at their table. Sr. Clare knew how to correct the girls and was never afraid to say what she had to say, but she always managed to win people over. Whenever she had to correct the girls, she did it out of love and with the goal of leading them to God. 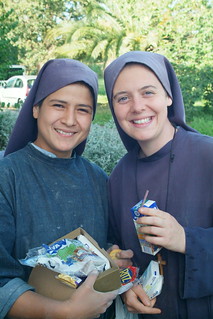 Sr. Clare when she was working on the house in Zurita

During that same camp, Sr. Clare could tell that I was a bit discouraged with my team. I had to go home before the camp ended and the Camp Leader asked my team to prepare me a “going-away gift”. In the end, they didn’t think of anything, so Sr. Clare got the guitar and went in front of all the girls and sang me a hilarious song with the music of “Oh Happy Day”. The lyrics were just “Oh Rachey Rach” repeated over and over again. She wanted to cheer me up and make me laugh.

On another occasion, I remember doing construction work with Sr. Clare at our small house in Zurita. There were lots of Sisters at the time, because we were re-doing our roof. There were lots of small holes in the yard behind our house and Sr. Clare tripped on one of them, twisting her ankle. I wasn’t near her, but I saw what happened. It looked as if she were going to cry from the pain and I saw the Sisters going over to help her. I kept working and five minutes later, I started hearing the Sisters chanting: “Sr. Clare! Sr. Clare!” I looked over and saw about fifteen Sisters carrying Sr. Clare on their shoulders, like a Superbowl champion. Sr. Clare, as always, downplayed her own pain to cheer us all up.