She Never Lowered Her Standards

Sr. Megan Conway:  She was firm with other people and not did make excuses for them. She always encouraged them to look at what they had to do for God and not lower their standards.

Sr. Megan Conway is from Virginia, US, and she met Sr. Clare for the first time when she travelled to Spain in the summer of 2005, before she entered the Servant Sisters of the Home of the Mother. Sr. Clare was a novice at the time.  Sr. Megan shares some memories from those first years. 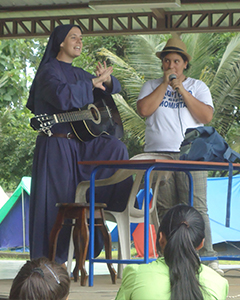 How would I describe Sr. Clare? Obviously, she was really funny. She had a gift with people and the capacity to make everyone laugh. At first, that’s how I met her, but I was kind of superficial and could only see the superficial things. Later on, as I got to know her and talked to her, I saw that she was always very focused on doing what God wanted… It was always very impressive to me how firm she was in her decision to follow Christ. And not only firm with herself, but she was firm with other people and did not make excuses for them. She always encouraged them to look at what they had to do for God and not lower their standards.

I remember seeing her pray in the chapel when we had time for prayer. It always impressed me a lot how she always had her head bowed. And she did it often, at least when she was in the community in Jacksonville. One time I went to visit, and she always knelt in the first pew before the Lord in the Blessed Sacrament with her head bowed. It really impressed me because it was a big sign of humility.

Later on, one day we were working together. I was in a bad mood and wouldn’t let anyone help me. I wasn’t a sister yet. And she said, “You know what your problem is?” And I was like “What? Like you can tell me...” And she said, “Your problem is that you’re orgullosa.” And I was like, “What’s that mean?” Like, “Why don’t you tell it to me to my face? Why do you have to say it in Spanish?” She said, “Why don’t you go look it up in the dictionary.” So, when I got home I grabbed the dictionary and I looked up the word “orgullosa,” which means “prideful.” I became really mad in the moment because it was the first time anyone ever told me I was prideful. And thanks be to God! If it weren’t for her, I don’t when I would have ever heard that to started to actually work on myself to change that. She told me I was orgullosa and I was like, “Oh my gosh, she just called me prideful!” And I got really mad and said, “Well I’m going to go tell her what she is.” And I thought, “I’m not the prideful one. She’s the prideful one to say something like that.” And I got really mad and went to go talk to her. But as I went, I kind of stopped in my tracks. The way I had always seen her pray came to my mind. I thought about all the gifts she had with people, her talents, acting and singing. And it impressed me a lot because I thought, “I really can’t go say anything to her. She can tell me I’m prideful because she has every right to be prideful for her natural gifts, but in reality she puts them before the Lord every day. I’ve seen her humble herself before the Lord, bowing her head in prayer. She can tell me I’m prideful because she’s someone who’s working against that, and she’s working to be humble and obedient.” That’s one of the biggest graces I’ve received from living with her.

There are a lot of good times I shared with her, lots of funny things, but I never forget that moment when she told me I was orgullosa. I realized how prideful I was and how she had the right to say it to me because she was working against hers. And because of that—I think it’s for that reason: seeing that she was fighting against that—I was able to accept it and actually try to change myself. She was an example for me.