Sr. Kristen Gardner: Sr. Clare was convinced that Cardinal Ratzinger was going to be elected.

Sr. Kristen Gardner entered the novitiate of the Servant Sisters of the Home of the Mother in 2004 when Sr. Clare was beginning her second year of the novitiate. These heartwarming stories from their month together in Rome allow us to get to know Sr. Clare a bit better: her joy, her capacity to turn work into prayer, and her love for the Pope. 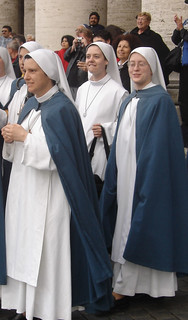 The Lord granted us a very big grace as novices: we spent a month of our novitiate in Rome, between February and March 2005. The sisters in Rome had to move to a new house and needed help to clean, paint, and prepare everything. As novices we were more than happy to go help them! In the mornings we worked, and in the afternoons  the professed sisters gave us classes about Patristics, the Consecrated Life, and the Life and Works of St. Teresa of Avila. On the weekends we would go on pilgrimages. When we went to work, we put handkerchiefs on top of our veils so that they wouldn’t get dirty. Sr. Clare always had trouble with her veil. It often slid back. I remember that it would fall little by little beneath the handkerchief until she was left with just the handkerchief! We laughed a lot every time it happened. She was always singing while we worked. She made up music to sing the Litany of the Saints. It was very joyful and we would sing the song while we worked, asking all the saints that came to our mind to pray for us.

Pope John Paull II was very sick at this time. We were able to go to the Hospital Gemelli to see him from the window for the Angelus. It was shortly after his tracheotomy. It was a very intense moment and a huge grace to be there. We were also able to go to the Opening Mass of the Roman Curia’s spiritual exercises, presided by Joseph Cardinal Ratzinger. It was Sr. Clare’s first time seeing him and hearing him and she became very fond of him after this.

Two months later, when John Paul II passed away, we novices received the grace to be able to return to Rome for the election of the new Pope. Sr. Clare was convinced that Cardindal Ratzinger was going to be elected. The whole car ride (over 20 hours in the van) she told us that it was going to be him. Sr. Sara Lozano, who was also a novice at that time, knew German, and Sr. Clare would ask her how to say things in German so as to be able to say something to Cardinal Ratzinger in German when he was elected Pope. Sr. Sara taught her a children’s song about an elephant in a forest, and Sr. Clare changed the words to: “Habemus Papam! Ratzinger, Ratzinger!”

During the Conclave, we went to St. Peter’s Square to wait for the white smoke. Sometimes Sr. Clare would make us laugh by imitating Cardinal Ratzinger’s voice perfectly. The day he was chosen, when the Cardinal Protodeacon announced: “Habemus Papam: Eminentissimum ac reverendissimum Dominum, Dominum JOSEPHUM...”  Sr. Clare exclaimed, “RATZINGER!!!” And I thought, “There are probably many cardinals named Joseph.” The cardinal continued: “Sanctæ Romanæ Ecclesiæ Cardinalem RATZINGER.” You can imagine her joy and everyone else’s joy, too, mine included. 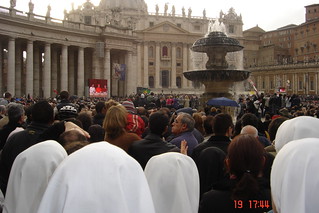 The next day while we were having lunch at home, we really wanted to see the new Pope. However it was not going to be possible until several days later, at the inauguration Mass. Fr. Rafael decided that we could at least pray the Rosary in St. Peter’s Square and look up at his window from there.

We were hoping to see the Pope, but it really was impossible. Sitting down in the left side of the Plaza, we had a good view of the Pope’s window. All of a sudden, a man came running towards us shouting, “The Pope is right there!”, while pointed behind him. He passed us and kept running in the direction opposite to where the Pope supposedly was. We all stood up immediately, but before we began to react, Sr. Clare was already half-way through the Square. She really, really wanted to see the Pope. Sr. Conchi was right behind her. Fr. Rafael and the rest of us started to run, too. I was at the back with Sr. Rocio and both of us did not believe it. “Yeah right,” we said, “How is the Pope going to be there? It’s impossible. Besides, the guy was running in the opposite direction. If the Pope were really there, why didn’t he run towards the Pope?” Anyway, we arrived, not too excited, behind everyone else. And it turned out that Pope was there! He had gone to his old apartment to pick up all his things.  When we arrived, he was still inside, but the people there waiting assured us that in any moment he was going to come out to return to the Vatican. Sr. Clare, thanks to her speed, had made it to the front row and when the Pope passed by, she had the perfect view.