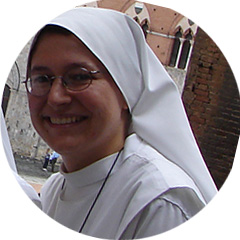 I remember how she did everything she had to do “100%” so to speak. She never did things halfway.

Sr. Anna is from the United States and is Servant Sister of the Home of the Mother. She lived with Sr. Clare during the novitiate for one year and coincided with her during several other occasions. 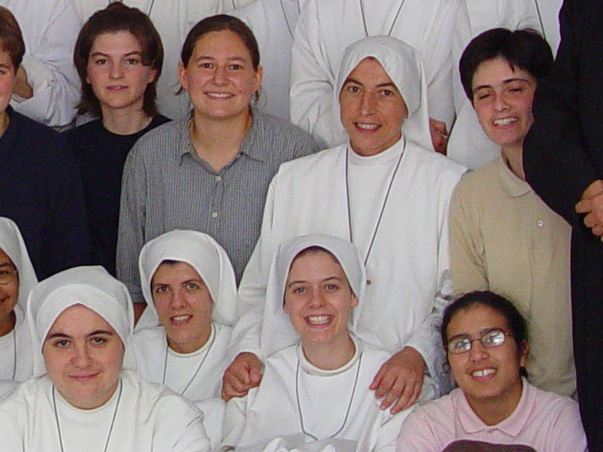 Sr. Anna (as a candidate) with Sr. Clare.

I first met Sister Clare in September of 2004, at our Motherhouse in Spain. I had just flown in from my native USA. I was a fairly worldly and superficial girl, a bit full of myself and certainly with no plans of becoming a nun anytime soon, i.e. someone who definitely seemed to be “Photoshopped” into the convent setting. Sister Clare had just begun her second year as a novice. I remember seeing her only on a few occasions, as she was almost always in the printshop working on our magazine. However, I will never forget her smile, her laugh, and how she made me feel so at home, despite my outward appearance, right from the start of my stay in Spain.

I was later blessed to spend nearly an entire year with her during my own novitiate (July 2005 – February 2006). My memories of her are almost all from that year, although we did spend the month of August together in Spain more than once as professed Sisters. The last time I saw her was just before my perpetual vows in September of 2012, however, all my memories of her continue offering me strength and inspiration in my vocation as a Servant Sister to this day. My sincerest gratitude to God and Our Blessed Mother!

I remember how she did everything she had to do “100%” so to speak. She never did things halfway... For example, whenever she sang at Mass or even on other occasions, you could tell she was not just moving her lips. She put her entire soul into the song and it really seemed like the words proceeding from her mouth proceeded simultaneously from her heart, lifting her song to God. This is evident, for example, in her recording of the song, “Quedose Prendado”. Also, during our time of chores in the morning, or if we had to clean together or work outside, etc... I remember how she was always doing whatever she had to do whole-heartedly.

We would often ride in the car together as novices. We would frequently pray the Rosary out loud, all of the Sisters in the car together. I remember how she would pray it with her eyes closed. One of the first times, I wasn’t sure why she closed her eyes and assumed that it was because she was getting carsick. I asked her if she was feeling okay and she told me she was fine; she just wanted to pray with her eyes closed to keep from getting distracted during the Rosary. She was a very active person, but she never neglected her prayer. She took God and Our Blessed Mother seriously.

Sister Clare always took things with a sense of humor, even when we were tired, had been working long hours on the construction of our house or in the garden, or if we had been carrying out a repetitive or monotonous task. It seemed like there was nothing that could tire her and she was always up to doing whatever it was we had to do. 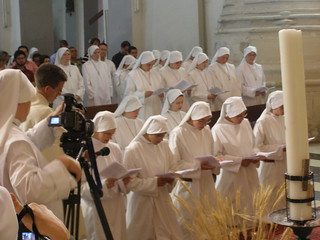 Ceremony of the renewal of vows of Sr. Clare and Sr. Anna in 2007

She loved all of us Sisters with her whole heart, with a sisterly love rooted in her love for our Lord. Her love was universal and made no exceptions. She was perfectly comfortable with any Sister at her side.

She had an exceptionally quick sense of humor, with a gift for making sarcastic or ironic comments to make everyone laugh. However, she never used this talent to make fun of others or make them the butt of a joke. She always made us laugh, but never at the cost of others. You always felt like she was laughing with you, never at you. She always helped us not to take ourselves too seriously. Comical remarks rolled off her tongue with terrific ease and she used all these gifts for making people laugh to cheer up everyone around her.

Sister Clare had so many talents and such an attractive personality, all of which she could have easily used to draw attention to herself. However she never used them for personal advantage. She was quick to discover others’ hidden talents and work together with them without trying to dominate or stand out in the group. This was evident, for example, during our novitiate when we would often compose songs for our fellow novices on their birthdays. I do not remember ever having seen her with a sad face or losing her patience. It’s not that everything was easy for her; she just knew how to be demanding with herself.

Sister Clare had an incredible imagination that she frequently put to use composing short songs spontaneously, in any circumstance whatsoever, just to cheer others up.

She also had a contagious enthusiasm. For example, she would often tell us about something she read from the life of a saint or something beautiful she had seen. Without reading or seeing anything ourselves, her enthusiasm set us all on fire with her. She used this gift for convincing others to set them on fire for God and for a life of holiness.