“She Was Very Simple”

Carmen Laje:  She had a very intimate union with the Lord when she received Communion. There were times when she didn’t sing in the choir loft, but close to the altar instead.

Carmen Laje is a sacristan in the parish of Loreto in Guayaquil, Ecuador, where Sr. Clare lived for two years. We interviewed her recently and publish here what she shared of her memories of Sr. Clare.

I met Sr. Clare when she arrived here in Guayaquil in 2012, in November. She had a strong spirit of joy and fraternity. The young people wanted to be around her as well. Apart from being joyful, she also had a radicality. What do I mean by that? It was a radicality of love and service to the Lord, which she expressed in every moment of her life.

I would describe Sr. Clare as a servant of God, but also very human. A clear example is that she had a very intimate union with the Lord when she received Communion. There were times when she didn’t sing in the choir loft, but close to the altar instead. On one of these occasions, I contemplated her when she had received Communion and she was in deep prayer. It looked as if she had left her body. It seemed to me as if Sr. Clare had been so intimately united to the Lord that she left her own body. It also helped me see that Jesus truly was in the Eucharist.

She was very simple and very humble. Moreover, whenever you asked her for something, she always did it. When she joined us in the parish, we had already been praying the rosary with the Servant Sisters, but when she arrived, she helped to teach us new songs to Our Lady. She put the songs up on a projector. During the rosary, she contemplated the mysteries, and when it was time to sing, she sang, reading from the projector, and helped us to sing the songs as well. We were very happy to be able to learn the songs, and we always said, “Oh Sister, it’s so beautiful…” And she would say, “It’s for the glory of God.” She owed everything to Him, and everything that she said was for the Lord. Everything was for the Lord. 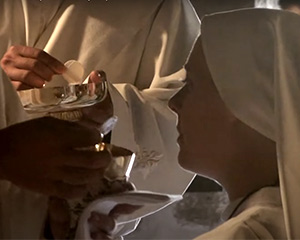 Whenever we went on trips, she would always be singing. She always maintained a spirit of unity within the group, making conversation and telling jokes. I said to myself, “How is it possible that she goes to teach in school so early in the morning, and when she comes, she still has the strength to sing with us?” I really admired this about her. I said to her, “Wow, Sister! How is it that you have so much strength to be with us? I would be exhausted.” She replied, “It’s the Lord, its’s the Lord. When you offer everything to the Lord, He rewards you.”

From what I could see of Sr. Clare—and I am very observant… one learns from observing, much more than from what people tell you—I never saw a lack of charity in Sr. Clare. Rather, she was very charitable.

An example I can give is that once, on my birthday, she said to me, “Carmen, what song would you like to sing to the Lord during Mass?” I was surprised that Sr. Clare had asked me what song I would like to sing for the entrance hymn. I told her the song, which I don’t remember right now, but it was song written by the Home, and only that, but also the song after Communion and a song to Our Lady. That surprised me a lot.