“Her charity was endless”

Sr. Merly Alcívar:  She always used to say, “Sister, what can I do to help?” She reflected God’s love. She made you want to be with her all the time.

In this testimony, we will share the second part of Sr. Merly Alcívar’s interview about the virtues that she saw in Sr. Clare when they lived together in Playa Prieta, Ecuador, from 2014 to 2016.

Another virtue she had was justice. She was always fair. If she had to say something to someone, if it was the right thing to say, she would say it. She didn't beat around the bush. She was not like that at all but she was always very just. And if a child didn't behave well, she didn't teach him the guitar. She would say, "No, because you didn't behave today." And if he behaved well, she would say, "Now I am going to teach you guitar because you behaved today."

Another of her virtues was diligence. She was very diligent. I don’t think she had any laziness in her. Why? Because when there was something to do, she was the first one there. And when she did things, she did them quickly and well. She wasn't the type to leave it half done or to rush through something. She did everything quickly and correctly.

Responsibility. She was very responsible. It impressed me a lot. We had to correct lots of exams for the children, for the teens. She was one of the first ones who had everything organized. She was very orderly. She had everything organized, all the children's exams, she had time to grade them, to tell them to be more attentive during an exam, not to leave things until the last minute, not to cheat, that something was not right, etc. She had time for everything.  Sr. Clare knew almost all the students' name, but she didn't call them by their first names. She called them by their last names, which is more complicated. She had it all: So-and-so didn't do this, and the next day she knew why the kid hadn't solved it. And when she saw that a student didn’t understand a class, she would say: "Look, such and such a day at such and such an hour, I'm going to explain it to you again." She could spend a whole week after class, explaining to the student until they understood. Of course, there were kids who took advantage and there were others who didn't. 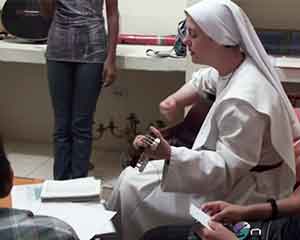 Sister Clare was always making jokes in the community, but at the same time she was tireless in her charity. She was always looking out for the needs of each of the Sisters.

I remember when we would go to class, she always had all the books she needed so as to not have to go all the way back upstairs. But if you heard one of the sisters say, "Oh, I left one of my books upstairs!” Sr. Clare would immediately respond, "Wait, I'll get it!" Then one of the Sisters would say: "No, Sister, I can go, I can go." "No, no, I'm already going," is how Sr. Clare would respond and she would already be halfway up the stairs in order to retrieve the forgotten books.

In community she was completely dedicated. She always used to say, “Sister, what can I do to help?” She reflected God’s love. She made you want to be with her all the time, but not because she was funny, told jokes and did this, that and the other. No! I often felt that she spread peace and serenity proper to those who are striving for holiness and to get to Heaven. I felt that a lot with her.