Many Virtues Stood Out in Sr. Clare

Sr. Merly Alcívar lived with Sr. Clare for her last year and a half in the Playa Prieta community, from October 2014 to April 2016. In an interview with her, we asked what virtues she saw that stood out in Sr. Clare. We share part of her answer and will publish a second part soon!

What is the virtue or virtues that you saw that stood out the most in her?

One of the things that struck me most about Sister Clare was her charity: the love with which she did everything, and how she treated each person with love. She never generalized. She saw each person individually. If she was with children, each one was important. She gave her time to that one child. If she was with a young person, it was not the whole class or all the young people who were there, no! She saw the individual: each student, his or her problem, and tried to solve it and help him or her. It wasn't like, “Let's help these young people in general.” No. She made that person's problem her own.

If she was with an adult and they told her to pray for such and such a person, she took it as her own.

I remember one time we were at Mass in the cathedral in Portoviejo, and there was a lady who was a little sad. I don't know why. She seemed depressed, and all of a sudden she went to Sister Clare and told her to pray for her and her family, because they were going through difficult times. And when she got into the car the first thing she said to us was: we have to pray for this person, because she is having a hard time. She took it as her own!

There was another lady who was sick. Her husband was already dying and she looked sad, depressed. And she went up to her and told her to offer her sufferings to the Lord at that moment because that was what was going to please Him. She told her that she couldn’t say, "Yes, I follow the Lord but I don’t offer my sufferings to Him..." 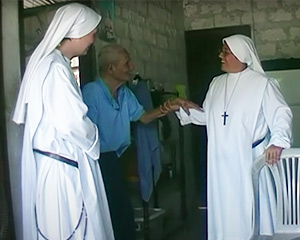 She excelled in obedience. She was very obedient. I was impressed by her obedience and helpfulness. She was always attentive. She was attentive to what this person was lacking, at what another person was going through, the circumstances, etc. In the sector of the parish she would find out that there was a family in need, and she would always comment, "Sister, you know what? I heard that this person is in need. Can't we help them?" And she would always help them.

Also when we were at camp, we would see her everywhere. She was always serving. You would always see her serving. She would eat very quickly to get up to serve. It was very impressive.

Her patience also stood out, because—really—she had an impressive patience. She had the 3 and 4-year-old children at school, which were difficult classes... She had the last hours, after recess, when the children were restless because they wanted to go home and everything. She taught them English and religion. And she would start to sing, play the guitar and everyone would calm down. And when everyone was serene and calm, she would start to talk to them. The teachers themselves used to say, "Sister, I don't know what to do with this child." She would take him aside, start talking and telling him things about the Lord and about the Virgin Mary. She would also start telling him that she was going to teach him the guitar and that he should behave, because if he behaved well she was going to teach him the guitar.