"This is Our Puyo Now" - Sr. Clare’s Generosity

Karolina Vera:  Sr. Clare had to walk for three and a half hours through the jungle, carrying her own backpack, with boots, a raincoat in case it rained and her habit full of mud.

Karolina Vera is a Home of the Mother youth member who was very close to Sr. Clare. She participated in the rescue work, until she recovered the body of Sr. Clare under the rubble of Holy Family Educational Center in Playa Prieta, Ecuador, from the earthquake of April 16, 2016. Karolina shares with us a precious memory of Sr. Clare's generosity and willingness to serve on the difficult mission of Puyo, in the Amazon region of Ecuador.

The Servant Sisters of the Home of the Mother, together with some priests and young people belonging to the Home of the Mother and the Holy Family School in Playa Prieta, used to go on missions twice a year to Puyo, in the Ecuadorian Amazon jungle, to evangelize the Shuar Indians (better known as Jibaros) and thus bring them the love of God.

Sr. Clare also went on missions to Puyo. She participated in the second mission we did, which began on February 17, 2014. We were a total of 35 missionaries: 8 sisters, 4 priests and 23 young people. We split up to visit eleven Shuar communities.

Sr. Clare, along with her missionary team, visited two communities: Sharupi and Shakay. To reach Sharupi, you have to walk through the jungle for an hour and a half and cross a river on foot. To get to Shakay, you have to walk another two hours from Sharupi, through a forest path that is very hard, and even harder if it rains. All together, to reach the second community, Sr. Clare had to walk for three and a half hours through the jungle, carrying her own backpack, with boots, a raincoat in case it rained and her habit full of mud.

Reaching the communities is not easy, even more so in the month of February, since in Ecuador it is the winter season and it rains a lot, and the road gets harder. To stay four days inside the indigenous communities, in the jungle, is not easy either. There are no basic services: no light, no bathrooms, not even beds, so you have to sleep on the floor. That's how the Shuars live and that's how we have to live while we're there.

I was not on the same mission team as Sr. Clare because, when she was staying in her community, I went further, to a community called Jampis which is about a six or seven hour walk away. The mission ended and everyone returned home with a full heart. 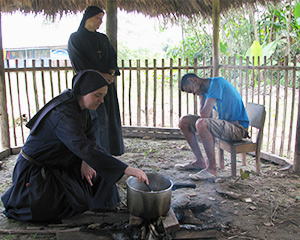 After some time, I saw Sr. Clare again, who was then in the community in Guayaquil. When I saw her I said, "Sr. Clare, let's go back to Puyo." She just smiled.

In 2015, Sr. Clare was assigned to Playa Prieta, where I live. One day, after I had been talking about Puyo, I remember she asked me why I liked Puyo so much. I said, "Because those people want to know and love God and they need Him. Because the smiles of those children are the most precious smiles I have ever seen. Because there I feel free and happy." Sr. Clare told me that she had given herself totally to the Puyo mission and that she was very happy and grateful to God for having allowed her to live the experience, but that she would only return there if God asked her to. She would not offer to go.

In 2016, shortly before Holy Week, the sisters announced that there would be a new mission in Puyo the following month and that whoever wanted to go could sign up. I approached Sr. Clare and said, "Let's go!" She just smiled. I smiled back at her. She asked me again why I liked Puyo so much and I gave her the same answer. She looked at me, smiled and left.

At the Holy Week encounter with the Home of the Mother on Good Friday night, Sr. Clare called me aside and, with a beautiful, glowing smile, said, "Do you know what I asked the Lord for today?" And I, intrigued, told her that I did not know. Then she looked at me and said, "I asked the Lord to go to Puyo on the next mission. I offered to go. I want to go not only because He asks me to, but I wanted to offer myself. I asked Him.” I have to admit that when she told me that, I was very happy, but above all I was very impressed and I could only think: "Really, Sr. Clare lives desiring holiness and gives everything to the Lord, everything."

Unfortunately, we were not able to go on missions to Puyo the following month. On April 11, 2016, Playa Prieta suffered a great flood. The whole town, including the school where the sisters lived, was flooded. The water was waist-high. During that whole week the sisters, the candidates and a small group of girls getting water out and cleaning the whole school. We were always laughing and saying, "This is our Puyo now. We have to give our all." We were so happy! On April 16th, Sr. Clare and the candidates who were repeating with a smile next to me, "This is our Puyo now, we have to give it all," died under the rubble to which the earthquake reduced the building where they were after giving everything during that day.

They gave everything until the end, everything, without reserving anything. Thank you Sr. Clare. Thank you Maria Augusta, Valeria, Mayra, Catalina and Jazmina. Thank you for the example. Thank you so much.