Fernando Guerrero, Ecuador: Now, I realize and I’m surprised to see how God can act in such an extraordinary way in a soul.

This is the second part of Fernando Guerrero’s testimony. This young man, who is now a religious in the Institute of the Incarnate Word, met Sr. Clare in the Loreto’s Parish choir in Guayaquil, Ecuador. He continued his friendship with her for a few years, and in this article, talks to us about the “masterpiece” that the Lord made of Sr. Clare. 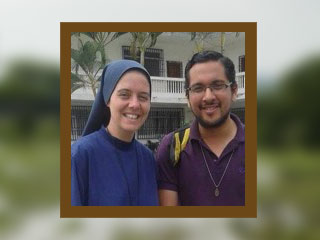 I heard that she had been a very famous actress in Ireland, and that if it hadn’t been for her vocation, she would have been known throughout the whole world. A religious brother of the Home of the Mother once told me: “I’ve seen a video of what she was like at first. Her way of being was that of an actress. She was very different from how she is now.” But it wasn’t until I saw the video that the sisters did in memory of her, when she passed away, that I believed what brother had told me. It was hard for me to believe it. Now, I realize and I’m surprised to see how God can act in such an extraordinary way in a soul. We can confirm what Jesus said in the Gospel, that those who are healthy don’t need a doctor.

Sr. Clare is an example of many things: that it’s possible to change your life; that you’re not a product of your environment; that if you decide to, you can be a saint, if you let God work. What He will do won’t be just any ordinary work, but rather a masterpiece.