Fernando Guerrero, Guayaquil, Ecuador:  A religious singer, like Christ, has to die to him or herself, be humble, and become nothing in Him who is Everything.

Fernando Guerrero is a postulant about to begin the novitiate in the Institute of the Incarnate Word. He met Sr. Clare in the parish choir at Loreto in Guayaquil, Ecuador, and had contact with her for several years. He has given us a long testimony which we publish part of today. Fernando talks about the humility he saw in Sr. Clare and affirms that in spite of her many talents, “she stood out for her faithfulness to her vows and her essence as a religious.” 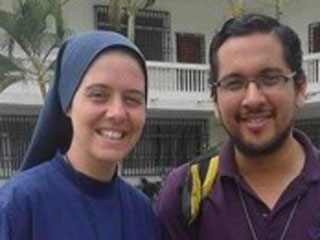 My first contact with Sr. Clare was through an invite to form part of the parish choir at Loreto. Sr. Clare was the director. What attracted my attention was that she had a unique joy to be a “choir director.”

As choir coordinator, she transmitted a lot of peace. She never lost that peace while trying to coordinate the choir’s voices. She taught us that our singing had to be for God alone, not so that others see our talent or for the people that listen to us at Mass. When someone sang out of tune, she did not correct without charity. In fact, she always sought the right way and place to correct. On several occasions, a look was enough.

I remember hearing her raise her voice just once while she was the director. Her worry was that the Masses and Holy Week liturgies turned out well. She raised her voice to make the choristers aware of this responsibility. For her, singing to God meant surrendering everything to Him, not just a little bit. It had to be done well, but without trying to stand out, because those songs were for God the Father, God the Son, and God the Holy Spirit, and you had to sing well.

I also remember her simplicity and humility. In spite of having a very good voice, she didn’t show off, quite the contrary. She humbled herself like Jesus, her Spouse. Like St. Teresa of Avila, Sr. Clare was simply “nothing.”

She had to teach to sing in the midst of some in tune and other out of tune, yet in her singing there was always a subliminal message: “Everything we do has to be done for the greater glory of God,” as St. Ignatius of Loyola teaches.

Even though she was familiar with the artistic world since she was very young, and that the most typical thing among artists is the desire to stand out and be known by all for his or her talents, Sr. Clare had already overcome all of that. 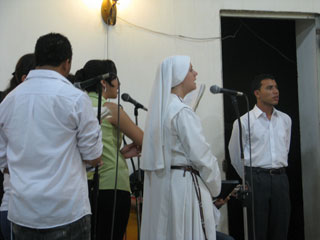 Sr. Clare stood out, not for her talent (which she didn’t hide, either), but for her faithfulness to her vows and to her essence as a religious, which was most important. I can vouch for that, because when her superiors sent her to the missions in Playa Prieta, and she would come with the rest of the sisters to Guayaquil, she wouldn’t seek to sing at Mass. Rather, it was the choir, the priests or sacristans that knew how well she sang, who would look for her so that she could sing. The same thing happened in the Rosaries sung at Loreto Parish. She didn’t always sing, but rather one of the members of the choir or anyone else who sang would do so. She learned to give up her place. She is such an example for artists nowadays! She is an example for Catholic singers in parishes who, glued to their guitars, are not teachers and often seem like owners and lords of the choirs. A religious singer, like Christ, has to die to him or herself, be humble, and become nothing in Him who is Everything (as is proper to the Carmelite spirituality that taken on by the Home of the Mother, her religious family). Sr. Clare had that “being nothing,” for she was that “nothing” in that All, which is God Himself.