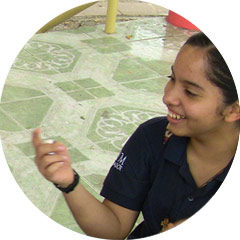 She had told me that her protector saint was St. Therese of Lisieux.

Karla is from Guayaquil (Ecuador) and entered in April of this year, after the earthquake, as candidate of the Servant Sisters of the Home of the Mother. 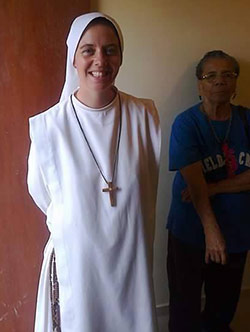 Camila Andrea, from Colombia, shared a quote with me from St. Therese.  It had come to her mind when she heard the news about the earthquake in Ecuador on April 16th.  Upon hearing the quote, I remembered an experience that I had with Sister Clare after doing Spiritual Exercises in 2014.  It happened in the Schoenstatt Sanctuary in Guayaquil, Ecuador.

Sister Lissette, who is now a novice but at the time was still a candidate, had given me a relic of St. Therese of the Child Jesus for my birthday.  It was very beautiful and it had a quote written on the back of it, but the quote was in English.  Since I didn’t understand anything, I asked Sister Clare to translate it for me. I wrote down the following translation in my journal, “When I die, I will send down a shower of roses from the heavens.  I will spend my heaven doing good on earth.”  Who would have said that two years after this, Sister Clare would depart for Heaven with the same mission?  She had told me that her protector saint was St. Therese of Lisieux and that, in the beginning, she didn’t understand why Fr. Rafael Alonso, founder of the Home of the Mother, had given to her as a point of reference a Carmelite nun who was known for her spiritual childhood and for doing small things.  Nevertheless, it was through prayer that Sister Clare understood the surrender and love that this saint had lived with and that she herself had to follow her example in order to live her religious life in the same way.

Sister Clare had a great gift for penetrating you with the message she was trying to transmit.  Whenever we would get distracted, her silence was enough to know that we were doing something wrong.  She told us that, in the end, we were the ones who were losing out.

She continuously fought to place everything at the feet of the Cross – her gifts, the love that people had for her, etc.  She knew that her talents did not belong to her, that they came from God and that they were for His Glory.

When I found out that Sister Clare was the only Sister left under the rubble, I experienced interiorly that the Lord wanted her for Himself now.  Yet I did not want to lose hope and I continued praying to Our Blessed Mother for all of them.

She and the girls are probably now in Heaven, praying for the conversion of souls and especially for the Home of the Mother, so that we will soon reach the fullness of our being.

Paper with the sentence translated by Sr. Clare