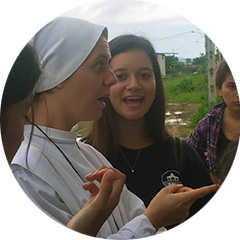 "I couldn’t believe that an actress with such a future before her had decided to leave everything in order to become a Sister."

Carolina Aveiga is from Ecuador and met Sr. Clare during her time there. 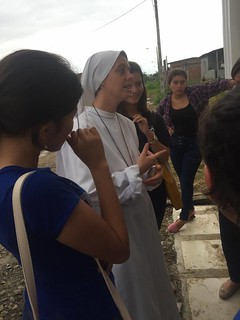 When I think about Sr. Clare only one thing comes to my mind: JOY. The joy of giving of oneself daily. It impressed me to see her so joyful every day. It was a joy that enveloped you. It made you want to know what it is that she “had” that made her so happy. It was later, when I listened to her tell the story of her vocation, that I realized that this joy only comes from God.

I remember the first time I met her. I was very far from God and very worldly, but I had decided to go on a pilgrimage with the Sisters. During those days, Sr. Clare told her vocation story. I couldn’t believe that an actress with such a future before her had decided to leave everything in order to become a Sister.  At that time, I also wanted to become a famous and well-known actress. But as she was talking to us, I felt that what she was saying was true. On another occasion, she herself had expressed it like this: “It’s God who is waiting for you when nothing in the world satisfies you”.

Sr. Clare was always very attentive to us girls.  Not only the girls of Playa Prieta, which is where she was normally, but also attentive to us, the girls of Chone. She always helped us as much as she could.  As time passed, she wasn’t just “Sr. Clare” anymore, but “comadre” (a term of endearment meaning “godmother” or “another mother”). She often said that when two people have lived a lot together they become like “comadres”. For this reason, from that moment on, she was only “comadre”. One day, talking to her about the hardships I had in my school, she said to me, “Comadre, I can’t understand how there are souls so hardened that they can’t even recognize God. Never stop going to Mass, because it’s there that you’ll find the strength to defend the Lord. I’m going to pray for you and your friends.” After that, she gave me a hug and encouraged me to continue on.

When we were at summer camp, I had to give a talk that lasted an hour, and as I’m very timid, I was really nervous.  Sr. Clare joked with me saying that she was a “super hero” and she assured me: “Don’t worry about it, comadre. I’m going to give you my super powers and everything will turn out fine”. And she took my hands in hers to “pass me her super powers”.

Another day, I asked her what the words of Jesus “I thirst” meant. She responded, “Look, comadre, you see how the world is today, right? On Calvary, the people didn’t understand what Jesus meant by saying these words, and so they gave Him vinegar.  Many times we don’t understand them either. Jesus is thirsting for souls. He needs souls that console Him”.

Another thing that she always told me was that having He who is “Everything”, the “nothings” of the world shouldn’t mean anything to me.

I remember her always encouraging me during the summer camps, meetings, and retreats. I had found in her my best friend, to whom I could always tell everything because I knew that she would be there to understand me and help me. I think that having known Sr. Clare was one of the biggest graces the Lord has given me, and for which I will have to give Him thanks always.