She had a Great Struggle 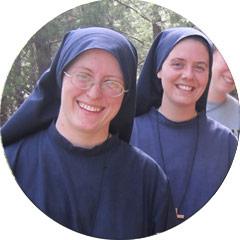 Sister Kristen Gardner lived very closely with Sister Clare.  In this first part of her memories, she tells us how she met Sister Clare and her first impressions of her.

Sr. Kristen is from Ohio (United States) and entered the Servant Sisters in 2002. She is now in the community of Rome (Italy). 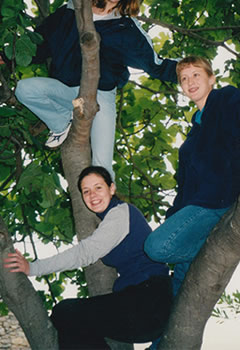 Sr. Kristen with Sr. Clare
during the summer of 2001 in Barcenilla (Spain).

The first time I met Sister Clare was in Holy Week of the year 2000 when she first met the Home of the Mother.  It was also my first Holy Week Encounter.  Even though there were very few English-speakers there, I didn’t meet her before the day that she went up in front of everyone and said that she wanted to become a famous nun.  I was thirteen years old, almost fourteen, and she was seventeen.  In Holy Week of the following year, we spoke more.  We were both staying together with other girls in a large room with lots of bunk beds.  I remember that instead of being in one of the talks, I was lying on my bed reading Sherlock Holmes.  Clare entered the room and asked me if I wanted to go downstairs and have tea with her.  She had a thick Northern Ireland accent and it took about five minutes before I understood what she was asking me.  We ended up cracking up, laughing, but her eyes nearly popped out of her head when I said “no”.  I didn’t like tea and had never even tried it before. But this was unimaginable for her.  I also remember the way she would normally greet people, “What’s the crack?” which means, “What’s up?”  She laughed at the expression on my face when I heard her – I thought she was offering me drugs or something of the sort.

After the Encounter we rode up to Santander in the same van.  During the trip she told us about her struggles with her vocation and about how difficult it had been for her to be faithful to everything she had received in Spain and on the pilgrimage to Italy when she went back home.  She told us how her family didn’t believe her and didn’t encourage her, as well as many other things.  Throughout the whole trip, I felt the desire rising within me to encourage her and help her in her vocation.  I was convinced that I had to pray for her, a lot.  She had everything against her, yet it was obvious that the Lord was calling her and that, seeing as she was open and willing to do His will, He would give her the strength to come back.

I returned to Spain that same summer, June 18th, 2001.  She had arrived shortly before me and was already talking about how she was going to enter as a candidate on August 11th, Feast Day of Saint Clare.  I remember how she struggled to stop smoking.  She knew that by August 11th she had to leave it all behind, but that doesn’t mean that it was easy or that she could simply stop overnight.

Since the second-year novices were going to take their first vows on July 2nd, Father Rafael had decided to take them to Lourdes.  There were some free seats in the cars and they invited the girls that were in Santander at the time to join them.  So at the end of June, we went on a quick trip to Lourdes and we stopped at a gas station to have breakfast.  The Sisters started taking out the plastic cups, bread, milk... they had everything.  When we finished breakfast, we started cleaning up, but we couldn’t find Clare.  All of a sudden, we saw her a few meters away talking with a man that had just parked.  The man had a pack of cigarettes in his hand and, yes, Clare was asking him for a cigarette.  She didn’t have any left and, seeing him smoke, the temptation became too great for her to resist.  I, with other girls, went running over to the man to tell him to not give her a cigarette - he thought the situation was very funny.  Truth be told, it was pretty comical, firstly because Clare had asked him for a cigarette using hand gestures and a few words in Spanish and, secondly, because so many of us had rushed over to him begging him repeatedly (not to mention in English) to not give her a cigarette.  The man, laughing, gave her the cigarette while we were all screaming, “No!!!”  But Clare "ignored" us  and asked him to light it with his lighter and she smoked it right there in front of us. 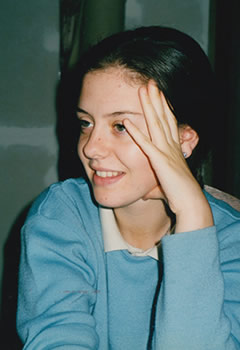 I’m telling you this story because it demonstrates the great struggle that she had to confront and, even though she didn’t have the strength to stop it all at once, in the end she stopped.  From the day she entered as a candidate, she never smoked again.  It would be easy to think that God would give her a massive grace to leave everything behind without any effort whatsoever just by going to Spain to become a sister… but that’s not how it happened.  She had to fight a lot.

After arriving at Lourdes, my friend Sarah and I bought Clare some mint candy that had Our Lady’s image on them in order to try and help her.  We thought that having something in her mouth would make it easier for her to stop smoking.

Fr. Rafael would frequently ask her to act out something.  She would normally perform two acts that she used to do for castings.  The first act consisted of her imitating a crazy woman who was alone in her cell.  It was amazing to see how she could change her expression and gestures from one second to the other.  She would go from an empty gaze to an uncontrollable hysteric laugh.  In the second act, she imitated the spouse of a drunkard after he had come home, drunk as usual.  She would “argue” with him, yell at him, and even be hit by him.  She had an amazing talent.

I too was fighting with my vocation at the time.  The courage that she had to leave everything behind helped me a lot.  In my case, what was most difficult was to think that by becoming a Servant Sister I would not be able to use the gifts that God had given me.  Yet seeing how God had asked Sister Clare to leave behind her gifts as an actress and her entire acting career in order to be a Servant Sister made me think again.  How was I not going to leave behind my own talents?  Her example was a tremendous help to me.

I have confirmed, in Sister Clare’s case and my own, that the Lord asked us to surrender all of our talents to Him in order to place them at His service in another way – but He asked us to immolate them first.