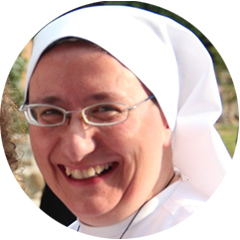 The fidelity with which she responded to the graces that the Lord granted her is truly inspiring.

Sr. Beatriz Liaño, SHM, is from Cantabria, Spain, and entered the Servant Sisters on November 1st, 1992. 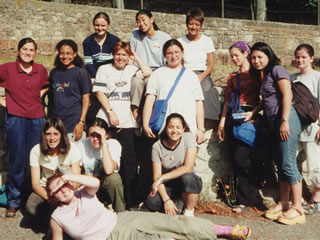 My first memory of Sr. Clare is from that famous Holy Week in the year 2000, when she arrived for the first time in Spain to participate in our Holy Week Encounter. She certainly didn’t look like someone who would soon be on her way to becoming a nun. She didn’t look too devout either, because she wasn’t. That’s why I was so surprised when she publicly announced in the final assembly that she wanted to be a Servant Sister. Everyone present immediately burst into laughter, of course, because with her comical way of expressing herself, it was what we least expected. I think the only person who took her seriously and understood that the Lord was calling her was Fr. Rafael. And thank God he did! She took the microphone and said those legendary words, “I want to be a famous actress, but now I want to be a nun too… so maybe I’ll be a famous nun.” Father immediately answered her, “Clare, if you want to be a famous nun, you’ll have to be very humble.” In other words, if you want to be a “well-known” nun, you’ll have to be a holy nun.

I was surprised to see that she returned that summer for the pilgrimage to Rome for the World Youth Day 2000. But it surprised me even more the following summer when she returned for good, entering as a Servant Sister. She entered as a candidate on August 11, 2001. That year, 2001-2002, I was assigned to the community of Zurita (Santander, Spain). I remember when a few months after her entrance, maybe October or so, we were having our evening meeting with the community and with Fr. Rafael before Mass. We were still living in the small house in Zurita. They called her on the phone and she stepped outside the room to take the call. The telephone was in the tiny parlor right next to where we were, so we could hear her responses. It sounded like she was having a very tense conversation with someone. When she walked back in, her face was radiant. Since she was so expressive, her whole being showed that something important had just taken place. Father couldn’t help but interrupt the meeting to ask her about it. She explained that the call was from her manager, insisting that she return to Ireland because he had a part for her in a movie. He told her not to be stupid, that it was a once in a lifetime opportunity, and that this time it wasn’t just a minor role- like the last movie she had participated in- but an important role. He told her to stop playing around and come back. After hearing her, we all just watched her, waiting anxiously, until Father asked her, “And what are you going to do?” Her face showed how surprised she was by his question, and she answered, “I already told my manager I’m not going back, but… let me enjoy this moment for two minutes before forgetting about it forever!”

Her manager continued to call her, trying to convince her to return to Ireland, until he was finally convinced that Sr. Clare’s decision was permanent. It’s surprising to see how the Lord touched her heart in such a way that an “offer” of this kind did not become a temptation that defeated her. She was so young, she had known the Lord for so little time, and the promises were so thrilling. The fidelity with which she responded to the graces that the Lord granted her is truly inspiring.

That year, her first year as a Servant Sister, I was impressed to see how sensitive her soul was for the spiritual realities. She had never had a real religious formation and yet she was transformed into a sponge that absorbed everything she heard about God and made it her own. Whenever we sat together at lunch or in other similar situations, I loved to listen to her speak and see how her knowledge and experience of God grew inside her.

At that time, HM Television was just getting started. I remember one day in Barcenilla, when she asked Father Rafael if she could work for HM Television, but in front of the cameras, acting for the Lord. Father was silent and did not promise her anything. She kept insisting, and even did a demonstration of all she was capable of doing. Her artistic talent was truly impressive: she could make you fall out of your chair laughing or move you to tears. Father explained to her that for now, he didn’t want to see her among the cameras, even to do “good things,” until she had been purified of many of her attachments, so that the gift she had would not become a threat to her vocation as a Servant Sister. I still remember how they looked each other in the eyes as Father spoke and a Sister translated for Sr. Clare, who didn’t speak Spanish yet. I remember Sr. Clare’s expression and how she perfectly understood everything Father was saying. She really learned how to purify her desires for worldly fame and all her vanities, and use her artistic talents for the Lord and for the salvation of souls. 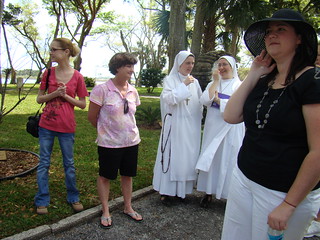 Sr. Clare and Sr. Beatriz in the United States

Several years passed in which we did not spend much time together, because I was in Rome and she was in the United States, although sometimes we met up in our house in Zurita during the summer. I saw her again in 2009, in Jacksonville, in a visit in which I accompanied Father Rafael and Mother Ana to visit the communities in the U.S. and in Ecuador. I remember one afternoon in particular: Father, Mother, and two Sisters from the community had been speaking with some girls who had asked to enter as Servant Sisters. That same day, a fairly large group of girls had also come to the Sisters’ house. The superior of the community told me to tell Sr. Clare to call the girls together to have a meeting. When I told her, her expression was troubled for a few fractions of a second. I realized that she had a sever migraine, and to lead a meeting that she hadn’t prepared with more than 30 girls meant a huge effort for her. But as I said, it lasted a few fractions of a second. She immediately gained her composure, called the girls, and started the meeting as if it were the easiest thing in the world. I don’t speak English, so I couldn’t even help her because I didn’t understand anything. But it was obvious that it was really helping the girls, and that they didn’t realize in what condition Sr. Clare was in. 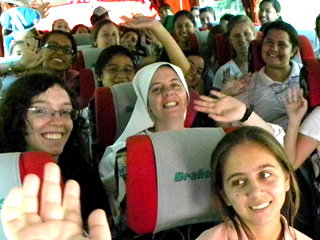 Sr. Clare at WYD in Madrid

The next important memory I have was in the World Youth Day in Madrid, in 2011. I was responsible for the pilgrimage, with a team of ten Sisters, working with about 120 girls of different nationalities and languages. Things got a bit hectic at times. It was not an easy task, because we did not know many of the girls, nor did they know us. It was difficult for some of them to get the hang of the schedule during the pilgrimage, because they had come expecting something else, and the fact that Madrid was overflowing with youth did not make it easy for us to manage our group. The Sisters worked very hard to serve the girls and make sure their experience helped them as much as possible on a spiritual level. Most of the problems during the pilgrimage came from a group of girls that had come from the U.S. As I don’t speak English, I felt very limited when it was necessary to intervene. Sr. Clare played a very important role in that moment with these girls. I was impressed by her ability to know the girls so quickly and locate all the problems. She knew what things she was able to solve, and should solve herself without overwhelming me- because I had a hundred other things to attend to – but she also knew how to keep me informed of everything I needed to know. And she also knew the situations which I had to settle, and I could count on her to translate for me. She spoke very firmly to the girls when she had to, but she also spent a lot of time with them laughing and joking, hosting our evening activities and trying to get to know them and win them over, to be able to win them over for Christ.

The last time I saw her was in October of 2012; I was about to be admitted into the hospital because I had to be operated on, and she was about to leave Spain to go to Ecuador. Both events were to take place the same week. The night before I went to the hospital, Sr. Clare and the other Sisters organized a “party” for me, with all their affection. I remember her being dressed up with the other Sisters as who knows what. They had written a hilarious song about a camel that they were going to give me as a gift, to carry me home once I was released from the hospital. We had a great time. This was one of the great services that she gave to the community: with her jokes and her creativity, she always knew how to create a lovely environment. Anyone who knew her just as an acquaintance would surely say, “Of course, since she has that personality, she’s always cracking jokes.” It’s true that she had a joyful and playful character, and a true gift for making others laugh. But having that good personality doesn´t necessarily mean that it was easy for her to always be joyful and cracking jokes. To maintain herself in that disposition year after year, each one of the fifteen years that we shared with her, after an exhausting day or even if she had a migraine, with her own interior struggles, her moments of temptation…it´s not enough to simply have a good personality; it’s also necessary to forget oneself, live in hidden sacrifice, giving yourself to others, with great charity… That same night when I was about to be admitted into the hospital, she was just about to go to Ecuador. I suppose that that night she had her own fears and concerns. She was about to go to a country where the sacrifices that awaited her were no secret – a country with a suffocating heat, where tropical illnesses are common, where violence causes insecurity for the citizens… But she didn´t make the slightest comment about herself. Instead, she did all she could to accompany me in that moment of illness.