If Jesus wanted it, then she wanted it. 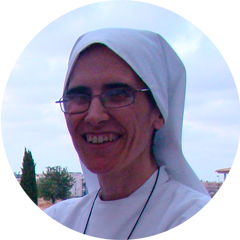 Souls were the truly important thing for her. No effort to help them and bring them to God was too large.

Sr. Teresa M Pérez, SHM, is from Cantabria (Spain) and she entered as a Servant Sister on March 25th, 1993.

I had the opportunity of meeting Sr. Clare at her first Holy Week Encounter in Spain in the year 2000. This has permitted me to be a witness, from my point of view, of her progress throughout these years.

She always stood out for her joy and sense of humor, her interpretive capacities, her outgoing character, and her gift for music and languages. But the key to the question is the way her life changed after her first personal encounter with Jesus, on that Good Friday, when she kissed and venerated the Cross. 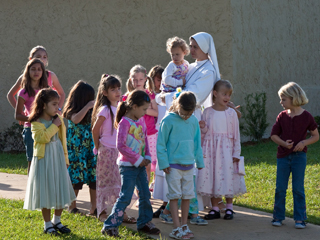 Sr. Clare in the United States

She was a very gifted person. She had the capability of touching people’s hearts, whether they be children, youth, or adults. My parents met her in a pilgrimage to the Holy Land. They called her the “crazy nun.” They were impressed by her immense joy and kindness. Thanks to the Lord, she converted and this permitted her to use all of her talents to bring souls to God. Often you could see her surrounded by young people, singing and full of joy. In the middle of all this she never backed down from speaking clearly and seriously; there could be no pact with sin, and she called things by their name. Souls were the truly important thing for her. No effort to help them and bring them to God, not even with her frequent headaches, was too large. She didn’t want people to admire her, she looked for the good of others. If she had to speak seriously and severely, she would do so. She sought God and tried to lead other to Him.

She was a very good actress and she often made us laugh representing different roles. She would do it for us, and she liked to make us laugh. Many times, I’ve seen her make the effort to overcome herself and swallow her embarrassment in front of a less common and new audience.

She was always willing to do whatever was asked of her, whether she felt up the task or not. If Jesus wanted it, then she wanted it.

As time went by, I saw her grow and mature very quickly. I would say that she took holiness very seriously and began to seek it. She was able to forget about herself and God became the center of her life.

Thinking about Sr. Clare always goes joined with a smile. She has always cause me joy.