Sr. Clare discovered Jesus’ love and took off running on this path. 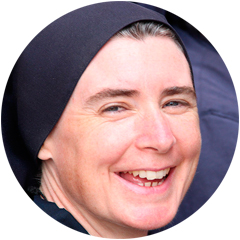 Who would have thought – while I was there in my mission to look after this girl and guide her on the path to holiness – that fifteen years later I would be carrying her on my shoulders in her funeral?”

Hna. Karen McMahon is from Galway, Ireland, and entered as a Servant Sister on September 22nd,1998. She formed Sr. Clare as a candidate.

I recently received the immense grace to be able to attend the funeral of my Sister, Clare Crockett, in Northern Ireland. I met her sixteen years ago, when she first came to Spain with a group from Ireland for the Home of the Mother’s Holy Week Encounter in Priego (Cuenca, Spain), in the year 2000.

She was only sixteen at the time. I remember her as a girl full of energy and life. She was very funny. She had that natural Irish charm that made you laugh just hearing her talk, with her thick Derry accent, constantly telling jokes and imitating people. She had a very special gift for everything having to do with acting and music.

After that Holy Week Encounter in Spain, she returned to her country. However, she came back to Spain that Summer, for the Home of the Mother’s pilgrimage to Italy. While I was there in Ireland just recently, a friend of the family told me that she had accompanied Sr. Clare on their way back from Italy to Ireland. They had to spend the night in a hotel in Spain before flying back to Ireland. She and Sr. Clare shared a room. Sr. Clare could not stop talking about all she had lived with the Home of the Mother and her desire to return to Spain at all costs, in order to be with the Sisters.

In fact, she did return, and she entered as a candidate of the Servant Sisters of the Home of the Mother. I was given the role of being her former during her time as a candidate. My mission was to help her grow as a Servant Sister. Looking back, I think, “This is amazing! Who would have thought – while I was there in my mission to look after this girl and guide her on the path to holiness – that fifteen years later I would be carrying her on my shoulders in her funeral?” 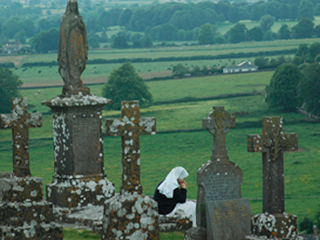 Sr. Clare during the pilgrimage to Ireland in 2010.

Sr. Clare discovered Jesus’ love and took off running on this path. She couldn’t stand superficiality or mediocrity.

I remember how, in 2010, shortly before making her perpetual vows, we went on a pilgrimage to Ireland with a group of girls from the United States. She used strong words and was clear in talking to them. Someone might have even thought that these girls would have been fed up with her by the end. Instead, they loved her and always wanted to be with her. They recognized the truth in what she said and her only interest was to talk to them about their salvation and holiness.

On another occasion, I was in Ecuador and accompanied her on a pilgrimage to a Marian shrine there. It was a 4-hour bus ride. On the way back, she spent the entire ride playing the guitar, laughing, and talking to the girls on the bus. When we finally reached our destination and said good-bye to the girls, we went inside our house. Fr. Rafael, who was also on the bus, had not been feeling well, but like Sr. Clare had spent the entire ride talking to the girls who came to ask him things. He sat down at the table and looked at Sr. Clare. She had a look of exhaustion and intense pain, because although she never said a word, she suffered from intense migrains. Fr. Rafael looked at Sr. Clare and said, “This is what we have to do for the souls, Sr. Clare.” They exchanged a glance of mutual understanding and Sister responded, “Yes, Father.” I felt as if I were in the presence of two spiritual giants. 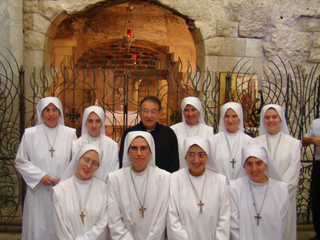 The Sisters with Fr. Rafael in the pilgrimage to the Holy Land.

I only have words of gratitude towards Sr. Clare’s family and the people we met in Derry, who welcomed us with such great affection and care. There were so many people present at her funeral, including the head of the Presbyterian Church of Northern Ireland, who was so impressed by her life that he spent an hour crying in front of her coffin. I remember how in the Holy Land, a person of a different religion made a hostile gesture towards our group. Sr. Clare went over to him and, looking him in the eyes, put out her hand and said, “We’re brothers.” The man was touched and his hatred melted away. I think she must be happy with this gesture of our brother from the Presbyterian Church who wanted to attend her funeral.

Being able to accompany my Sister, in her final farewell on this earth, has been a grace that I will always treasure in my heart. For me, she has truly been an example of who a Servant Sister should be.