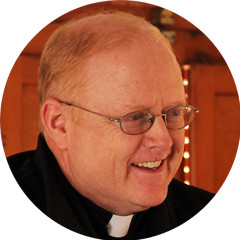 Fr. Colum Power was born in Cork (Ireland) in 1965. He is a Servant Priest of the Home of the Mother, part of the same apostolic movement that Sr. Clare belonged to. He got a Master’s degree in Literature in 1991 and a Doctorate in Church History in 2013. He is the author of "A Touch of the Gardener's Hand", "Honey from the Lion's Carcass", and "The Catholic Categories of James Joyce". He dedicates his time to apostolic activities for the youth organized by the Servant Brothers of the Home of the Mother.

Man is not a product of his historical circumstances and social environment. Or at least he should not be. Sometimes, sadly, he is. When he exerts his intelligence to respond creatively to the situation in which he finds himself, then he retains his personality and makes a contribution. When he fails to do this, he elects to “go with the flow” like deadwood floating downstream. It cannot be denied that Sr. Clare was shaped by her environment, but she was not defined by it. 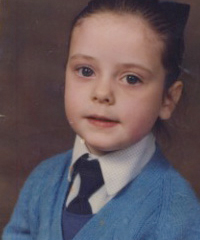 Sr. Clare at 7 years of age

To be specific, her environment was the Brandywell, Derry, Northern Ireland, in the time of “the Troubles.” She was born in 1982. “Operation Flavius,” for example, happened in March 1988: three unarmed IRA members were shot dead by the British SAS on the island of Gibraltar while pursuing plans to plant a bomb at a military base. When the three bodies were returned to Northern Ireland for burial, a Loyalist terrorist attacked the crowd of mourners at Milltown Cemetery with hand grenades and pistols, killing three people and wounding 60. Three days later, at the funeral of the victims of this second killing, two armed non-uniformed British army corporals accidentally drove into the funeral procession. The mourners, anticipating another attack, dragged them from their car. They were stripped of their clothes, beaten, and shot dead.

Sr. Clare was six years old when these three episodes occurred. Sadly, the list of similar episodes, and even worse ones, is long. And much of it happened on or very close to her front doorstep. The Falls Road in Belfast and the Bogside in Derry, close to where she grew up, are two of the most notorious locations in Northern Ireland, owing to their association with Republican activity. The Bogside was a stronghold of the Provisional IRA (Irish Republican Army) and of the even more radical INLA (Irish National Liberation Army).

Recent studies have shown that children and young people were the most profoundly affected by the constant tension and intimidation. Vandalism, teenage alcoholism, violence, chronic unemployment, divorce, and housing shortages, were the order of the day. Higher than average rates of depression, alcoholism among women, and suicide among the youth have been identified in the aftermath of the conflict. Sr. Clare gave public testimony of the frequent visits to loved ones in jail that were part of her childhood, and of her personal struggle with teenage alcoholism. 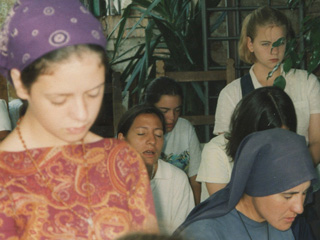 Sister Clare during the pilgrimage to Italy

At the same time, her remarkable talents for acting, comedy, and music, were quickly recognized, and she was already presenting television programs for the youth on Britain’s Channel 4 at the age of 15, and at the age of 17 for Nickelodeon. She had a minor part in a major, "critically acclaimed" film and soon established her position on the inside track for a highly successful show business career. A combination of three powerful experiences empowered her to walk away from it all.

The first involved the discovery of the love of Christ crucified when venerating the Cross on Good Friday. The second happened when she was throwing up in the bathroom of a nightclub and "heard" the Lord say "Why do you keep scourging me?" The third occurred one night in a room in a top London hotel as she read the following day's schedule starting with the time the chauffeur would pick her up. That was the moment when she realized that, compared to Christ, it was all straw. The fact that at the age of 18, in 2001, she had the vision and strength to walk away from it all and begin her life as a consecrated religious is testimony to the power of God’s grace and to her own instinct for the authentic.

The famous French actress Brigitte Bardot once stated, rather sadly, that having given her youth and her beauty to men, she would give her the wisdom and experience of her old age to the cause of animal rights. Sr. Clare gave her youth, beauty, and talent to Christ, and received in return a light, a beauty, and a joy that she did not have before, a fact many have failed to perceive. Instead of headlines like “Tragic nun loses life in Ecuador earthquake,” it would be more accurate to write: “Comic nun gains a hundredfold and eternal life in Ecuador.” 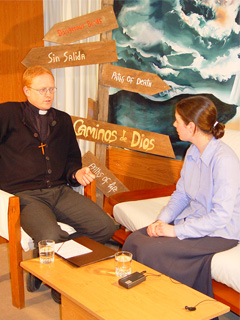 Sr. Clare as a candidate with Fr. Colum

The Editor of the Belfast Telegraph struck the right note when he wrote on the 19th of April, three days after her death, that she was a model for the Province of Ulster: “Her death is an immense loss first of all for her family, who in their grief must also be tremendously proud of her ... She was the true face of Northern Ireland. In today's increasingly secular world many will look askance at young people who join the religious life but Sister Clare felt that the call of God was her most important ambition and that giving to others brought greater rewards than any material-oriented lifestyle. She was a true ambassador for this province wherever she went and it is people like her in all walks of life that we need to show the positive image of this community.”

Initially, in her struggle to renounce the prospects of fame and fortune, Sr. Clare comically entertained the idea of combining her “two vocations” by becoming “a famous nun.” In the end, she opted wholeheartedly for the life of hiddenness with Christ, and Christ is already fulfilling in her his promise that “whoever humbles himself will be exalted.” The Belfast Telegraph is Northern Ireland’s leading secular daily newspaper. A few short days after her death, the living Gospel Sr. Clare wrote with her life and death is already being shouted from the rooftops.

I began saying it cannot be denied that Sr. Clare was shaped by her environment, but she was not defined by it. Who knows, perhaps by the inspiring example of her heroic choice to love God and others above self, she might actually end up shaping the environment she emerged from. Certainly, she has done her part. “Consummatum est,” Christ said; “I have run the race,” said Saint Paul, “I have fought the fight, I have kept the faith, the grace of Christ has not been sterile in me.” Sr. Clare can surely say the same. Now, she has passed the baton to her people.

I began saying it cannot be denied that Sr. Clare was shaped by her environment, but she was not defined by it. Who knows, perhaps by the inspiring example of her heroic choice to love God and others above self, she might actually end up shaping the environment she emerged from. Certainly, she has done her part. “Consummatum est,” Christ said; “I have run the race, I have fought the fight, I have kept the faith, the grace of Christ has not been sterile in me,” said Saint Paul. Sr. Clare can surely say the same. Now, she has passed the baton to her people. 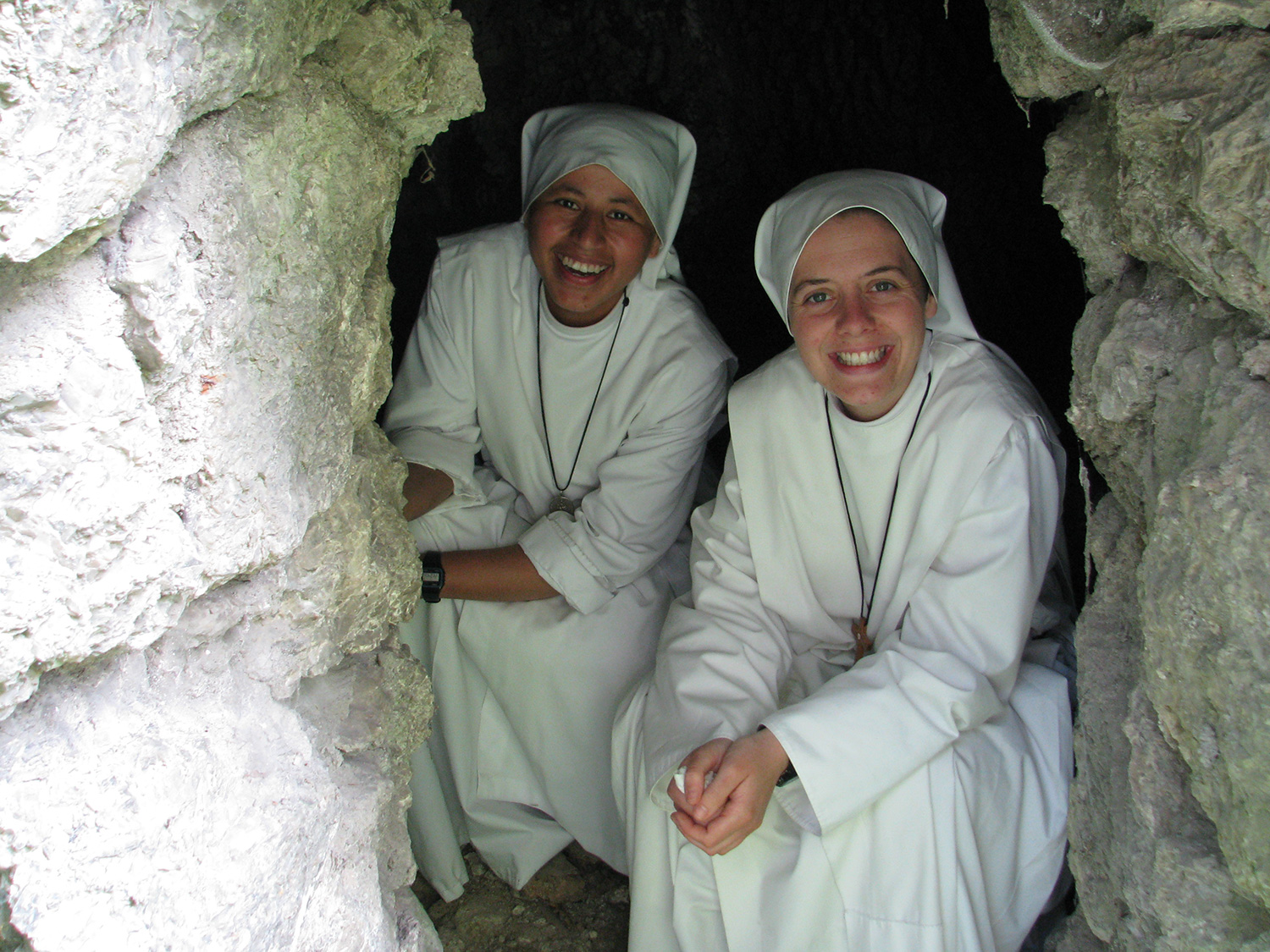