“She Made Life Happy”

Sr. Sara Lozano:  I thank the Lord for having her as a sister and for the time I did spend with her. I learned a lot from her.

Sr. Sara Lozano and Sr. Clare spent their first years as Servant Sisters of the Home of the Mother together. Sr. Sara highlights in her fellow novice that “Sr. Clare loved her country, family and the Servant Sisters, had great apostolic zeal, and her presence made life happy.”

My first memories of Sr. Clare are from the Holy Week Encounters she took part in when she was just 17 and 18 years old. I was the same age as her (we were born two months apart) and I remember her very open personality impressing me. It seemed like she wasn’t embarrassed about anything! She spoke in public, sang with her group from Derry… Since I was so shy, I was amazed by her self-confidence in dealing so naturally with Fr. Rafael Alonso, founder of the Home of the Mother, and the sisters, even though she barely knew them. I also remember her on the pilgrimage to Rome in 2000 for the Jubilee. You could say that Clare was a live wire, a character, and no one knew what she would come up with next. 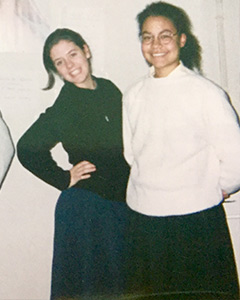 I also remember when I went with Fr. Rafael and another candidate to pick her up for the airport. I had just entered as a candidate and she had arrived in order to enter. I spent two years living in the casita with her and other candidates and girls. With Sr. Clare you were always at home. She made life happy with her funny comments. Her wit amazed me. She made up a song to encourage those of us who had to go back to class after the weekend, (which was tremendously hard for us), and another song about the life of a candidate. In everything she made up, she knew how to include the rest of us so that it was always a team performance. She also used to lead our Marian processions throughout the house. In fact, it is possible that it was her idea. During this period, I think she grew in holiness through the construction work on the sisters’ house. She made up a song for it, too. Studying was not her strong point, nor did she have much religious instruction, so she made up a tune to learn and memorize the Ten Commandments. She also had to practice a great deal of ascesis to change the criteria she received from her background and which she knew was not in accordance with what Jesus asks of us, like, for example, loving one’s enemies. 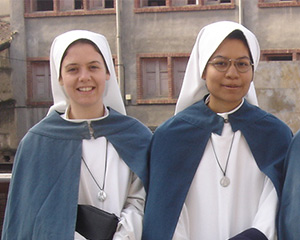 We “met up” again in the novitiate and spent a little over a year together. Both of us went to serve the elderly in Priego during the same time period twice. It was so funny to see how she interacted with them. Once she had to organize a moment of prayer and I remember that later she apologized because it was like a litany—I loved it. It was similar to St. Francis of Assisi’s “Praise of the Most High God,” from a person in love who cannot stop praising the greatness of her Beloved. There were a few books that impacted her. One was by St. Josemaría Escrivá, and she quoted something that had impacted her and which I have never forgotten: “Lord, You are Who You are: supreme Goodness. I am who I am: the worst, dirty rag in this rotten world. Still, You behold me, you seek me, you love me.”

Surely, a spark left us when she went to the community she was sent to after the novitiate. I remember a few weeks after she left, I heard Father comment—I do not remember his exact words—something like Sr. Clare was truly being a full-fledged religious.

I was in the US with her during a few months at Assumption Parish and School (July-August 2007). During this time, I could see her zeal for souls with my own eyes. She made sure to choose religion books that faithfully conveyed Church doctrine. She was attentive to each student and teacher, especially to their spiritual well-being, and was not afraid of condemning situations or actions that displeased God. She was very brave in these cases. She could not stand the fact that “the world” made its way into the school. She did not agree Halloween should be celebrated because it is not a Christian holiday. She also saw to it that the music put on at school was appropriate and not worldly. 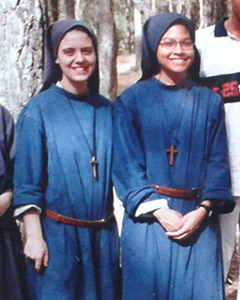 During her last years I did not see Sr. Clare a lot, but I thank the Lord for having her as a sister and for the time I did spend with her. I learned a lot from her. In conclusion I can say that Sr. Clare loved her country, family and the Servant Sisters, she had great apostolic zeal, and her presence made life happy. The Lord did great things in her and I believe that she truly knew how to make Our Blessed Mother’s presence felt. Although she had such a loud personality, I believe that the Lord and Our Mother did their work in her in a hidden way, so that without us realizing it, she was already prepared to go to Heaven. After her death, I, amazed, witnessed the religious and secular media cover the news of her death and the story of her life. I cannot help thinking about the “famous nun” either and how the Lord is making that a reality in His way.