“Hey Father, Don’t Forget to Pray the Rosary Along the Way”

Sr. Ruth Maria O'Callagan:  I never remember Sr. Clare with a sad face, or complaining about anything or anyone.  If something was difficult for her, she would just make a joke about it and get on with it, no matter what it was.

Sr. Ruth Maria O’Callaghan was born in Dublin, Ireland.  She knew Sr. Clare before Sr. Clare went on her first trip to Spain and witnessed her conversion as well as the subsequent transformation that took place in her.  With her wonderful sense of humor, Sr. Ruth Maria shares with us funny stories that she remembers of Sr. Clare during the time that she lived with her. 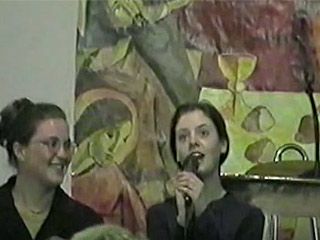 Sr. Clare at the Holy Week Encounter in 2000

What can I say about Sr. Clare?  When I think about her, the memories that come to me are of the two of us always breaking our hearts laughing.  We couldn’t look at each other without making a silly face or saying something funny.  Someone could say that now we have to talk about all the beautiful things that she did but there’s no need to look for them; they’re obvious.

I remember the first time that I saw her.  I was a candidate.  A group of us Sisters went to Ireland and traveled to the north.  Sr. Therese Ryan (who was also a candidate at the time), Sr. Ruth Ibañez, and Sr. Elena Braghin were with me.  We were praying the Rosary with a large group of people in one of the houses when, all of the sudden, the door swung open and Sr. Clare came in with her friends.  They came in laughing and causing a lot of hassle, dressed in their Secondary School uniforms.  That night, I didn’t talk to her, but I did the following day, because we went to speak in her Secondary School.  She was very expressive and asked us a lot of questions. The questions that she asked us were: Why do you have short hair? Why are you wearing a long skirt? Don’t you like wearing earrings? Are you really going to be a nun?

The second time that I saw her was during Holy Week Encounter in the year 2000, in Priego, Spain.  She arrived with a group of people from Northern Ireland.  Even though in her testimony she would always say that she “did her own thing,” she was still approachable, and you could talk to her.  We were in the same group and Sr. Isabel Cuesta was in charge of us.  Even though on the outside she seemed superficial, she thought a lot and asked about a lot of things.  One day in our group meeting the topic was about the Eucharist. Sr. Isabel asked me to give my testimony of my conversion, since I converted because of an experience I had with the Eucharist. Sr. Clare had never heard the word “Eucharist” and didn’t know anything about it.

That summer, she came to Rome with us for the World Youth Day in 2000.  She was very funny.  I remember her with her wine colored leather jacket.  She only talked about shoes, clothes, and other superficial things with the girls that she came with.  But even then, in the midst of all that, the Lord continued calling out to her heart.  Many times, she went to the front of the bus to sit with Fr. Rafael and speak with him.  She sang to him and asked him about a lot of things.  One day, when we stopped at a gas station, Father asked her, “What would you do if I threw away your famous lighter that looks like a toilet seat?”  With a face of ‘I don’t care,’ she said nothing.  Then, Father launched it into the air far, far away.  We, of course, cracked up laughing, but her face transformed and she walked away really upset.  But her anger didn’t last long.  A little while later, there she was again sitting by Father’s side asking him about more things.

When she finally arrived to Spain to stay, I remember a lot of things that happened. As she was an actress, she was able to interpret different roles of people. One of them was imitating a woman at home when her husband comes in drunk.  She acted in such a way that even though there was no one who played the role of the “husband,” it seemed as though he was there.  Sr. Clare even cried and everything.  I could put myself right in the scene.  She also imitated a little boy named Carlitos.  He was a snotty and cross-eyed boy.  He was such a disagreeable boy that you even ended up feeling compassion for him.

When she was a candidate, I remember that it was very difficult for her to stop biting her nails.  Father recommended that she wear wool gloves to help her.  Since she was such a clown, she went around the whole house acting like a “mime” with the gloves.  Every time we would see each other around the house, she would all of a sudden begin a mime about something, like she was trying to climb up a wall or was stuck in a room with no way out. She was so funny. I also worked with her in the printing press, making the magazine.  Since she was learning the Catechism, she used to make up songs to help her remember important things. 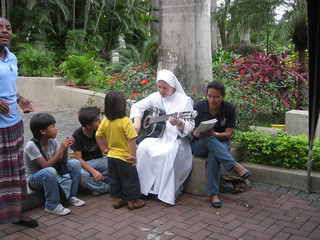 As a Sister, I coincided with her very little as I have been many years in Ecuador.  When she arrived at Guayaquil, I was in Playa Prieta.  Later on, when she went to Playa Prieta, it was to substitute me.   I never remember Sr. Clare with a sad face, or complaining about anything or anyone.  If something was difficult for her, she would just make a joke about it and get on with it, no matter what it was.  One could think that since she used to be an actress, she was accustomed “to acting.”  But, at times, I saw how she was very tired. A lot of times she had very strong headaches and even then, I never saw her refuse to do anything she was asked to do.  I used to call her the juke-box, those machines that you can put money into and pick the number you want.  She was great.  She is great.

I had the joy of also being with her on one of our mission trips to Puyo, with the indigenous Shuars.  One time, I was on the same team as Sr. Clare and Jazmina.  We went with a Polish priest on our team.  Since there’s no electricity, night falls when it is six o’clock in the evening.  Our entire missionary team got together in a hut one night, started a fire, prepared dinner and were talking.  It got late, the conversation ended, and we wanted to go to bed, but the priest wanted to pray the Rosary before going to sleep.  Sr. Clare looked at me and said with a surprised face, “Doesn’t he realize what time it is and how tired we are?”  Looking at the priest she asked him if he was joking or serious.  Everyone cracked up.  It could seem like that time she was not acting very virtuously, but I tell this to show how natural she was, and to affirm that she always said things with a good sense of humor.  In fact, in the end we prayed the Rosary.  The following day, the priest had to go walking for an hour and a half through the jungle to celebrate Mass in another community.  While he was leaving, Sr. Clare shouted out to him, “Hey Father, don’t forget to pray the four parts of the Rosary along the way, ok?”  And of course, we all started to laugh really hard. When we would play with the kids she would speak like them so that they would understand her. She had a great capacity to enter into “their world”. In one of the communities called Shaki, they have a custom of playing a game of football men against women. As we were there with them, of course they invited us, and of course we played. I think I spent more than half of the game on the ground laughing at Sr. Clare, seeing her running around with her water-boots and talking like them. Every time we looked at each other, she looked at me with a face as if she were saying, “I'm going to die right here,” but she continued playing with them as if it were the most normal thing in the world. She was always like that. She never showed her fatigue.

As we were leaving the community of the indigenous Shuars, another funny thing happened to us.  Sr. Clare was ahead of everyone and I was a little bit behind with Jazmina and Enrique (a student from our school).  All of the sudden (we don’t know how), Sr. Clare fell down sideward to the ground.  It all seemed to happen in slow motion.  She completely wiped out and was covered with mud.  And of course, she could not get up.  The whole situation made us laugh so much that we couldn’t even help her up.  In the end, Enrique went to her rescue.  Every time we looked at her, all covered in mud, we started to laugh.  When Fr. Pedro arrived, he asked, “But Sister, what happened?”  And she replied, “Nothing.  I just like to play in the mud.”  And of course, there we were laughing again.  Our entire trip was like that.