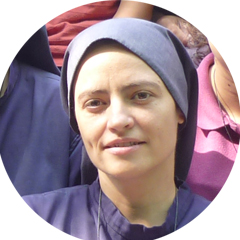 I think it was thanks to that tireless “branch” that I was able to make it through the entire way there and back.

Sr. Gema, SHM, met Mayra when she was 14 years old. Here she remembers an experience that they both lived in the missions in Ecuador.

Mayra was fourteen when I first met her. She always seemed to me to be a very sincere person, very honest when it came to making important decisions in her life. She was very determined and resolved to achieve whatever it was she felt she had to do. She was willing to make every effort.

Two years ago, we both went on the same mission trip to Puyo, in the Ecuadorian rainforest, bringing the Gospel to the Shuar Indians. We were also providentially put on the same mission team headed for Yampis, the most remote village that the missionary priest, Fr. Pedro Olives, has been able to reach within the heart of this rainforest. You arrive in Yampis after about an eight-hour trek through the Amazon Rainforest. The path is strenuous, one that does not give you time to stop to rest or take in the view. The rainforest is a dangerous place, even more so at night. For this reason, we were obliged to keep walking almost non-stop. 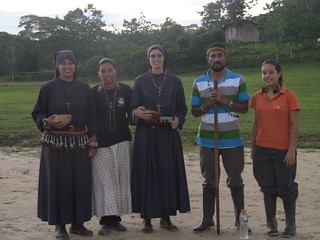 Mayra during the missions in Puyo

Each mission team on the trip had eight members. Even though we always tried to walk together as a group, we were sure to walk at least two by two to make sure nobody was left on their own or lagging behind. My partner for most of the path was Mayra. We talked about many different things along the way. We talked when we could, because there were moments in which we had to choose between walking or talking. Since standing still was not an option, we had no other choice than to stop talking and walk in silence. However, this silence was often broken by our own laughter and joking remarks as we fell, tripped, or lost our balance – all of which took place on a constant basis. We joked about these challenges, to make the journey a little lighter.

Towards the end of the path, there came a point in which I physically felt like I couldn’t go any further. My legs were giving out and I was having a very hard time just trying to put one foot in front of the other. We spent the last part of the way crossing a mud pit. Our boots sank into the mud and we had to double our efforts to pick up our feet and keep walking. Every step implied an intense effort. We grabbed hold of the tree branches to keep “afloat” in the mire. On several occasions, Mayra seemed to have no problem walking along in the mud, while I had a rough time with the mud clinging to my boots and I could barely move. Realizing this, she was always ready to give me a hand in helping me out of the holes in the mud. She would jokingly comment, “Sister, I’m your little tree branch.” It became our inside joke for the rest of the way. Whenever I needed help, I would call out to her saying, “Ramita, ramita!” [Ramita means, “little tree branch” in Spanish]. She would come over and stretch out her hand saying, “Here’s your little tree branch.” I think it was thanks to that tireless “branch” that I was able to make it through the entire way there and back.

Along the way, I would ask her if she was okay, how the trip was going, etc. She always responded, “Yes, I’m alright.” Up until the end of the journey, she kept saying, “Yes, I’m alright.” The last time she answered, she added, “It just feels like my boot is kind of squishing my big toe.” When we finally arrived and took off our boots, she showed me her toe. Her nail was purple. “It kind of hurts,” she said. A few days later, when she was back home, we met up and she told me, “Sister, my toenail fell off.” While we were in the Shuar village, she had made no mention of her pain. In fact, it even seemed to be of little importance as we saw her playing soccer with the Shuar children and always offering to help out in whatever way she could.