Are you organizing a screening of Sr. Clare's Film?  Download posters here. 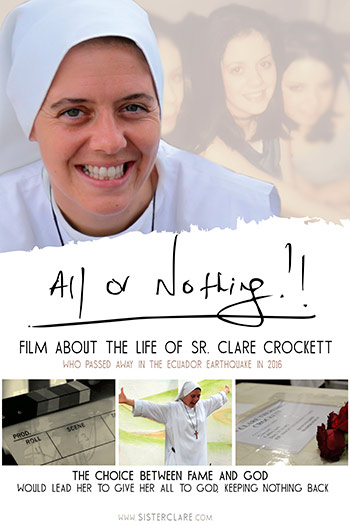 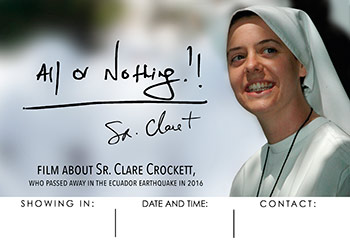 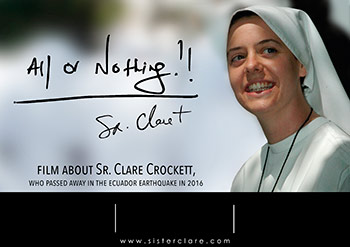 Questions for Discussion After Viewing the Film 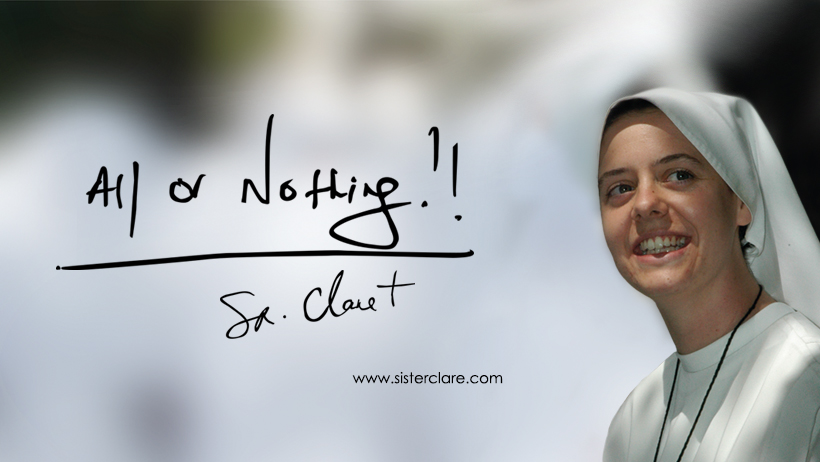 Release of the film "All or Nothing: Sr. Clare Crockett2

This past July 26th, Jesuit Luis Ruiz, also known as “Luk Ngai:” father of the poor, passed away in Macao at the age of 97. He was a priest well known for his vast work with refugees, elderly, and lepers in China and Macao.

Fr. Ruiz was born in Gijon (Asturias), Spain on September 21, 1931. He entered the Society on September 20, 1930 in the Province of León. Fr. Ruiz began the novitiate in Salamanca in 1931, continued it in Marquain (Belgium), and went through his juniorate and philosophy courses also in Belgium, in Marneffe, due to the situation of the Society in Spain during those years. After his first vows he requested and received a mission in China, but due to the upheavals going on, he was sent to La Habana, Cuba, to await his destination.

In 1940 he traveled to China, where he studied Mandarin in Pekín, and Theology in Innen City Anking. On June 7, 1945, he was ordained a priest from the hands of a Chinese bishop. He began to visit the mission centers throughout the diocese of Anking. Since this was during the Japanese occupation, there was no transportation available, so he would walk 60 to 70 kilometers a day. He recalls: “Those were dangerous times, for the communist guerillas were already in our midst.” In 1949 the Popular Republic of China began and the communist troops arrived at Anking that year. Father said: “After a few months of not being able to find Christians that would denounce the missionaries, they closed our mission and the Mission Center.” The fathers in charge, among them Luis Ruiz, were incarcerated with Archbishop Melendro. “At that time, I got a very severe typhoid fever… I was without a doctor and without medicine, in the care of our Brother who is a nurse. Once healed of the fever, I had to leave China, expulsed by the authorities.” After the expulsion, he arrived in Macao on November 1, 1951. In those years Macao was a very poor city, where the Chinese were beginning to arrive from the north as they fled the communist troops. Fr. Ruiz describes: “They were people who arrived with just the clothes on their back, without means of neither life nor work, and I found myself among them, with my Chinese-Mandarin to be able to communicate, but also without money to help them.” He started to make contacts to obtain food, and began a massive labor of support for the refugees. “Soon some American organizations began to send me rice, flour, and other necessities that we began to hand out among the refugees. In those years, I did all sorts of things, I was even the rice bag transporter, but I was very happy…” His help reached some 30,000, marking the beginning of Caritas of Macao. The aid did not consist only in giving them food, but in obtaining documentation for the refugees, finding them jobs, and offering their children education. He also opened a church for the Portuguese and Chinese refugees: the religious services were in English and Mandarin. In 1952 they organized night Catechism classes in Mandarin. “Teaching Catechism at night was my most important work,” said Fr. Ruiz. “The first baptisms were during Christmas of 1953. The number continued to grow, reaching some 5,000 baptized, who have gone throughout the entire world.”

After years of intense activity, in 1969 China declared Macao as Chinese territory under Portuguese administration, and that therefore, there could not be any Chinese refugees in the Chinese territories. As such, he also helped those that arrived in Macao being illegal refugees already. It was then, according to Fr. Ruiz himself: “I had an inspiration: to help the elderly, for some refugees had already spent 20 years in Macao and so there was a lot of older people.” He began the Bethany Nursing Home for men, Saint Mary’s Nursing Home for women, Carmom Nursing Home for men with specific problems, and a part of the Saint Luis Center for the mentally ill. “All these initiatives were supported by the fervent Christians that helped found and direct these necessary works for those that lived in extreme poverty,” Father Ruiz stated. All of these works began to improve as Caritas of Macao began strengthening their cooperation with the local government. In 1989, the Sisters of Charity of St. Anne began to look after them.

In 1986, more than 70 years of age, he entered the world of lepers and began to focus his attention toward them, helped by various religious congregations. “In 1986, because of the great earthquake in the Province of Yun-nan, I returned to continental China. In the Province of Canton, I met a saint, the zealous Fr. Lino Wong, who introduced me into the forgotten world of the lepers. My first visit to the leper colony of Tai-Kam was unforgettable. It was located on a small island, about an hour away from the continent, traveling through high waves in a fishing boat. I went ready to give them American cigarettes… They were waiting for us. I wanted to give them a strong handshake, but many of them did not have hands and they couldn’t take the cigarettes that I would give them; I had to light the cigarette in my mouth and pass it on to the mouth of the leper who, later, would take it with his stumps… I was left marked by the immense misery that I witnessed, and interiorly I felt the tremendous abandonment that they live in, away from all human contact.”

Thanks to Fr. Ruiz, four of the Sisters of Charity of St. Anne, one from Sevilla and the other three from India, “buried” themselves in that most sad island, and in five years, the sad, dirty, abandoned place transformed its sick into joyful, happy, and clean people.

“Later, we visited practically all the leper colonies in the province of Canton, some of which are located in impossible locations. At one point a doctor told me, ‘The lepers of the Chinese North East are doing much worse.’ I went and was shocked, I could not believe what I was seeing: without water to drink or electricity, demolished houses, rags for clothing, and dying of hunger. One leper colony was in the bottom of a cavern. With much difficulty, I went all the way down to see the lepers that 40 years ago were lowered into there with ropes. Seeing this, one cannot remain with his arms crossed and say, ‘May God protect you.’”

He traveled through thirteen Chinese provinces, visiting more than one hundred places having 10,000 lepers, for whom he organized the necessary attention. In 2005, he accepted an offer from the government of the province of Hunan to create a center for people with AIDS.

To the question about how he was able to do all of that, Fr. Ruiz answered: “I do not know, nor do I want to know, it’s enough for me to know that it is God who is doing it. For me, it is an immense joy to make people happy, and in them, God.”